After a week of uncertainty of Tomi Lahren’s ultimate fate at The Blaze after she was suspended by her boss Glenn Beck, The Independent is reporting that we finally have a ending to the Lahren vs. Beck saga. And it’s not such a happy ending for Lahren:

Ms Lahren was suspended last week after flip-flopping on abortion and declaring herself pro-choice. Now, sources close to Glenn Beck’s network say that she has been banned permanently.

Earlier this month, Ms Lahren announced that she was pro-choice during an appearance on ABC’s daytime show, The View.

She also said its hypocritical for conservatives to be in favor of limited government while opposing abortion.

Tomi may end up migrating somewhere else to stay in the spotlight, but for now, her fate is uncertain. 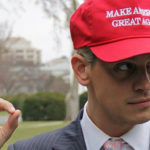