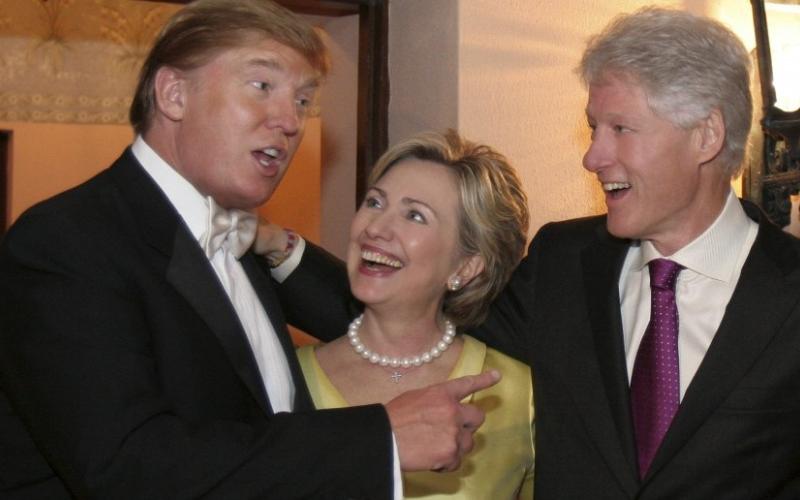 Hillary Clinton and Donald Trump have both claimed they will unite the American state. So who’s the real uniter? The man calling for unified strength or the woman calling for compulsory group love?

I was sitting on the balcony of my father’s fifth floor beach condominium, recovering from the preceding day’s adventure into the world of alcohol induced debauchery, when a very strange thing occurred. A very strange thing, indeed. Let’s call it a “revelation” for now.

The day before had begun with an old fashioned and an Irish coffee over breakfast, continued with two bushwackers and a “flora-bama” slammer over lunch, and finished with, well, only the gods know what and exactly how much went down during dinner and the rest of the evening.

Such adventures are akin to making war with oneself, a ritual of madness whereby one divides conscious from subconscious, flirts with matters of life and death, and has faith in Dionysus to conquer the night and one’s dreams along with it. Of course, I must say, such a journey is not without its perils, and even if one survives the adventure mostly unscathed, there is usually a headache to battle in the morning.

So there I was, sitting on this borrowed balcony hung over and head aching, guitar in hand playing blues to the wind, and as I take my first sip of black coffee towards my recovery, I feel like Bertie Wooster, as my “eyes shoot out of their sockets and rebound from the opposite wall like racquet balls.”

Actually, there was no opposite wall in my case, only a beach side vista, so my eyes kept on skipping like rocks across the sun-splattered ocean.

That morning, the ocean was crashing into the white sands of the coast where, to my eyes’ illusion, it seemed to be corralled into a single corridor and jettisoned back into the Gulf of Mexico along a sun-lit highway, a shimmering confluence streaking for miles across the ocean’s vast face, carrying my eyes onward and upward into the horizon. But my eyes were only the beginning. In their wake, my own vista rained down on the one below, as all my life’s memories and anticipations, sufferings and joys, disappointments and hopes galloped down the golden lit path as one unified song. It was as though the whole of my life was being sung to the heavens, the words of Percy Bysshe Shelley lining the way:

Thou of death must deem

Than we mortals dream,

Or how could thy notes flow in such a crystal stream?

We look before and after,

And pine for what is not:

With some pain is fraught;

Our sweetest songs are those that tell of saddest thought.

Yet if we could scorn

Hate, and pride, and fear;

If we were things born

Not to shed a tear,

I know not how thy joy we ever should come near.

Then it was gone.

“If only more hangovers were like this!” I thought.

“What is in this coffee?”

Usually, hangovers leave me dim-witted and at war with my past self, not sublimely lucid and at peace.

“How strange,” I thought further, “maybe a little adventure in the evening, maybe a little division in the dark, can lead to waking up whole again.”

After finishing my coffee, I stepped back inside the condo to prepare another magical cup only to find my father awake and the television switched on to some crappy cable news channel. Upon hearing just a few seconds of their blather, my headache was coming back even stronger. Even without a hangover, politics these days has a way of making me feel nauseous and in pain, but the news that particular morning was especially gut-churning. Donald Trump had won South Carolina. Hillary Clinton had won Nevada. They were both well on their own golden way to a general election showdown.

It’s not that I hoped for someone else to win those primaries — I loathe all would be Presidents equally — I just loathe some nominees more equally than others. I can anticipate the fresh hell a Donald Trump versus Hillary Clinton general election will be — in terms of both policy and discourse. And as I sit here now a week later, back home in Montgomery, AL, the feeling of nausea is only growing stronger. And I didn’t even drink last night.

I should be drinking now. Something about watching Hillary Clinton brand herself as a “uniter” by saying, “we’re going to start by working together with more love and kindness in our hearts and more respect for each other, even when we disagree,” culls together my cynicism, and I begin to laugh in disgust. I laugh because I suspect too much about our government, too much about the meanness of our politics, too much about the very nature of human beings to take Hillary Clinton’s call for unity, love, and respect seriously. I have nothing against unity, love, kindness, and respect as qualities worth possessing, but I am against the power-hungry using such language to cloak their ambitions.

What a cruel irony these “uniters” bring to the table of American politics. By calling for “working together” or “unifying”, these great uniters call for division from those they brand as “dividers.” Hillary Clinton is of course setting her sights on Donald Trump with all this “motherly” talk, but Trump has also billed himself as a uniter, saying, “The level of hatred between Republicans and Democrats was unbelievable. The level of — I’ve never seen anything like it. I’m going to unify. This country is totally divided. Barack Obama has divided this country unbelievably. And it’s all, it’s all hatred, what can I tell you. I’ve never seen anything like it…”

Neither is a true uniter. For all their inclusive language, these “uniters” are swift to cut people off from the herd in their search for power. They bring a sword to the table as they call for peace! They carry a white flag as their battle banner!

As Nietzsche put in the mouth of Zarathustra:

State is the name of the coldest of all cold monsters. Coldly it lies; and this lie slips from its mouth: “I, the state, am the people.”

It is a lie! It was creators who created peoples, and hung a faith and a love over them: thus they served life.

Destroyers are they who lay snares for the many, and call it state: they hang a sword and a hundred cravings over them.

You see, politics is inherently about division. When one “hangs a sword and a hundred cravings over” a people, the people are bound to bicker over who has the right to rule, and those “superfluous” ones who seek to wield the power of the sword are only lying when they claim to be unifying the country. Given the amount of power at stake in Washington D.C., half the country is destined to be very upset on election day — and for good reason.

The urge to say “you’re with us or against us” is especially strong in the populace during election season. But I plan to stand aloof from the whole sordid affair. I would rather go into the solitary wilderness than fall on bended knee before this or that politician. Eric Voegelin once remarked in his work The New Science of Politics, “A man cannot fall back on himself in an absolute sense, because, if he tried, he would find very soon that he has fallen into the abyss of his despair and nothingness,” but I am willing to test Voegelin’s claim, willing to risk the fall so I may one day carry “paradise within” myself.

I see no need to fall back upon the trappings of the “new idol”, the state, because I have hope in man’s spirit to live freely without its cold lies, without its false promises, and without its inherent divisiveness draped in a fake togetherness. I have hope that what we are seeing in politics today is the crack up of the state. Yet, I’m sure I will be branded as a “divider” or “malcontent” for writing these very words. Well, I will wear the label with pride. I will head into the darkness a divider, hoping I will find a spontaneous unity when I awake in the morning. Unity cannot be demanded at the point of the sword or by the jeers and cheers of the mob; unity is discovered — like a revelation — by going it alone and finding fellow free spirits along the way, our vistas blending together as a single golden bridge into the horizon beyond:

The earth is yet free for great souls. There are still many empty sites for the lonesome and the twosome, surrounded by the fragrance of tranquil seas.

A free life is yet possible for great souls. He who possesses little is that much less possessed: blessed be a little poverty!

There, where the state ends — there only begins the man who is not superfluous: there begins the song of the necessary, the single and irreplaceable melody.

There, where the state ends — look there, my brothers! Do you not see it, the rainbow and the bridges of the Overman?