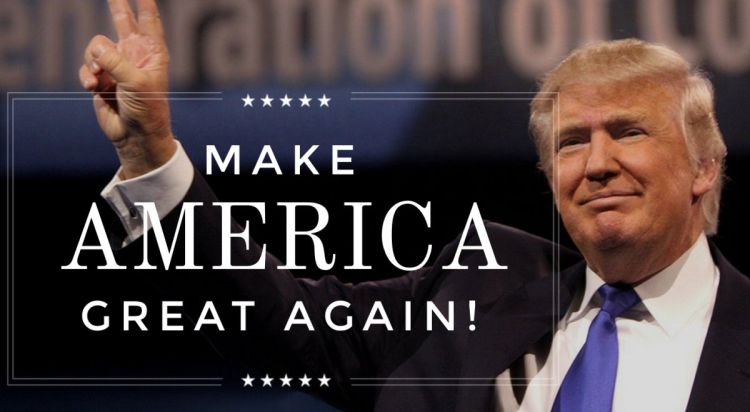 If the United States government continues as it does today, bestriding the narrow world like a colossus, it will be stabbed through the heart by daggers inscripted with the nation’s founding principles: the words “life, liberty, and the pursuit of happiness” shedding salty tears of blood from sullied steel.

But I hope this day will not arrive.

I personally distrust any herd’s fervor, any political conspiracy, and especially those carried out in the name of liberty. The democratic herd renders liberty a mere justification for its own power, ironically claiming even the power to destroy individual liberty. This herd mentality confuses the masses into thinking their liberty is a product of the collective and their political process, that liberty is only possessed in full by “the people” but never by individual persons.

Yet, even I–a black jacketed, liberty loving malcontent–cannot deny the infectious spectacle of that excitable throng now marching under the banner of TRUMP.

These past four years I have had the pleasure of working in the weird and wacky world known as conservative talk radio. I would not trade the experience for the world. Not only have I met and worked with gracious people I now call friends, I have also developed my own craft of oratory along with being provided a sea level view of the American right wing’s cultural and economic unease which is now bubbling over as resentment towards the ruling class.

Trump has tapped into this resentment. And my job as a conservative talk radio producer recently provided me with another opportunity: to witness the Trump frenzy first hand.

A few weeks ago Donald J. Trump was a phone-in guest on one of our shows.

His phone operator was gracious, inquisitive, and quite concerned with punctuality. She didn’t want to bring Mr. Trump on the phone line until we were a minute out.

Once on air, his connection sounded exquisite. He was using an expensive phone system. The best I’ve heard in four years of call-in guests. Not surprising.

He greeted us with an, “It’s an honor to be here,” and then proceeded to speak extempore for 12 minutes as he is known to do. He clearly had a message he wanted to get out (hyping his speaking appearance at a football stadium in Mobile, AL that evening), but it didn’t come across as polished and poll-tested. It came across as simply Trump, or more powerfully, as though he was hosting a radio or cable news show.

He’s not interested in how the transcript will look afterwards; he doesn’t care if you think he and his followers are stupid and bigoted or the new face of American fascism. The more you call them stupid, bigoted, fascist, racist, xenophobic, etc. the more fuel it adds to their bonfire lit hootenanny.

He’s simply interested in connecting with the masses in his own way. He only cares if the people, his people, are actually hearing him and understanding him in simple terms.

As that Trotskyite with big feet and true believer in democracy, George Orwell, once said of democratic propaganda in England:

…some day we may have a genuinely democratic government, a government which will want to tell people what is happening, and what must be done next, and what sacrifices are necessary, and why. It will need the mechanisms for doing so, of which the first are the right words, the right tone of voice.

Trump would hardly be Orwell’s man (it would probably be Bernie Sanders), but Trump certainly knows the common man; he knows how to reach the common man with common language, and no matter what the political class is saying these days, he knows the true pith of politics when it comes to American democracy.

You see, democratic elections aren’t about high ideals or policy prescriptions or rational decisions made by an enlightened populace (sorry, Mr. Orwell).

No, democratic elections are about winning power.

Accordingly, Trump plays up the adversarial nature of the presidential race like he’s in a pre-fight hype video. He told us and our radio audience, “I’m going to make you proud tonight. It’s going to be amazing.” He proclaimed how he was going bring “victories” to the nation. And he constantly pointed out how he was rising in the polls whereas his opponents were shrinking.

I think we can all agree: better to be erect than flaccid.

Instead of directly sparring with Jeb Bush on policy points, he simply called the former Florida governor “weak” in a hilarious way. He turned questions of complex policy into personality appeals. On immigration, he told the people of Alabama he was working with AL Senator Jeff Sessions. On negotiating with China, he threw out the name Carl Icahn. On the issue of justice, he brought up South Carolina congressman and conservative hero, Trey Gowdy.

After his short appearance on our airwaves, the audience was set ablaze with excitement. Calls rolled in non-stop for the next three hours.

The true Trump followers were swooning and ecstatic. Their support has created a nearly untouchable cult of personality around Trump, a thousand man strong Kevlar; they are willing to defend the man against any criticism no matter how reasonable.

Yet, even non-supporters called in, saying they thought his brand of politics was fun, that his campaign seemed like a celebration, and that Trump seemed sincere in his promise to “make America great again.”

Trump was even being to compared to the patron Saint of modern conservatism, Ronald Reagan.

The herd was eating up what he was selling.

So the question is: why?

Well, today, it is common to hear those on the right-wing say “I am NOT a Republican. I am a conservative.” The right feels betrayed by their own GOP leaders. They loathe the inexplicably orange man, John Boehner, as well as the chinless Foghorn Leghorn of the Senate, Mitch McConnell. They loathe these two almost as much as they loathe Pelosi, Reid, Clinton, and Obama.

Trump calls all these leaders “stupid” and “losers” just as your average radio caller would. It plays.

Trump is anything but “politically correct.” He sounds like a walking, talking version of the Drudge Report.

And the right-wing, contrary to their passionate rhetoric couched in appeals to American liberty, does not wish to restore individual liberty as the cure to the nation’s ills. Rather, they seek two things: (1) an opportunity to be part of something greater and (2) material enrichment, however contradictory–more jobs and higher wages, lower gas prices and higher housing values, cheap imports and expensive exports, low taxes and a secure warfare/welfare system. Their desire for material wealth is so easily understood it need not be explained here, but as far as their first concern, it can be explained thusly: their fear and resentment towards the ruling class is marked by an old-time religion summed up in a question, “Remember the good ol’ days?”

Remember Trump’s slogan, “Make America Great Again.” Remember his appeals against illegal immigration often put in simple, anecdotal, and violent terms. Remember his mercantilist rhetoric promising jobs and higher wages and trade “victories” over other nations. Remember how he touts himself as a once crony now turned whistleblower not beholden to special interests.

Needless to say, Trump is speaking directly to the right. And quite effectively. He’s using their language.

Yet, there does remain an apparent mystery: how is it that the one person whipping up the right-wing into a frenzy of renewed hope for national greatness is a member of the ruling class himself? How can a member of the plutocracy be the voice of a populist movement against the plutocracy?

Well, this move of plutocrat turned populist should be of no surprise to watchers of American Democracy. Often, the base desires of the populist herd are the same desires held by the plutocracy. That is, even when their goals may seem at odds, both the ruling class and the herd are motivated by their lust for power. Both groups are driven to the democratic arena by their fear, envy, and eros.

Under democracy, plutocrats are simply populists who have found power and success.

Thus politics, under democracy, resolves itself  into impossible alternatives. Whatever the label on the parties, or the war cries issuing from the demagogues who lead them, the practical choice is between the plutocracy on the one side and a rabble of preposterous impossibilists on the other. It is a pity that this is so. For what democracy needs most of all is a party that will separate the good that is in it theoretically from the evils that beset it practically, and then try to erect that good into a workable system. What it needs beyond everything is a party of liberty.

Put simply, the choice is between (1) the plutocracy, (2) the “impossibilists,” or (3) the liberty lovers.

The fact that the liberty lovers wish to diminish power for the sake of liberty often dooms them to failure in democratic elections. Thus, the real choice is usually between democratic idealism and pragmatism–both in search of state power.

Whereas, Bernie Sanders is offering his egalitarian idealism to the left (the likes of which would make Murray Rothbard spin in his grave,) Donald Trump is offering a sort of braggadocious pragmatism to the right.

Sanders and Trump do not appeal to liberty. It’s not in their interest to do so, and I worry, even if they did, their calls would be met with a deafening silence.

For, the right-wing wants more government just as much as the left-wing does. Both wings love democracy when they are winning, and both fear it when they are losing. Just as they would in the shadow of a powerful colossus or Caesar. But neither Trump nor Sanders is the Caesar. The American people and their democracy are. This is what democracy looks like.

And they, this American Colossus, are full of dissonance, full of sound and fury, full of fear and vaunting, scared of their own tall shadow, a shadow that blinds them to the perilous path they have chosen to walk down.

May they heed these words before tragedy strikes:

Men at some time are masters of their fates.

The fault, dear Brutus, is not in our stars

Yet, I fear it does no good to quote Shakespeare to parrots.

The Perils of Student Loan Debt