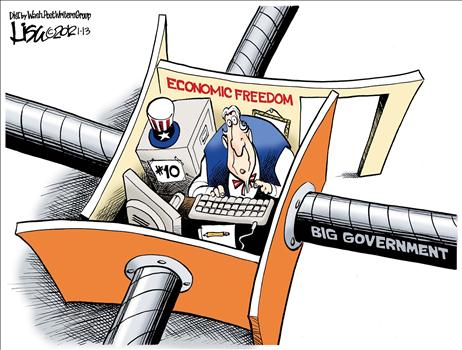 So many modern problems, from excessively powerful corporations to the high cost of living, are blamed on the “free market”. Using that term in a negative way in front of most audiences will generate applause and cheers. But is that consistent with reality? Are the problems we now face the result of too much economic freedom? Let’s take a look at some ways in which government intervention in the economy hurts people.

Many people are concerned about big corporations and conglomerations. They think that government is necessary to prevent such accumulations of wealth and market power. However, the reality is far different. Regulations, which have steadily increased over time, make it more difficult for businesses to thrive. Small businesses in particular have trouble complying with all the regulations and paying the taxes and fees that are levied upon them. This makes it easier for older and larger businesses to keep a greater share of the market. That’s why businesses often lobby for additional regulations, protective tariffs, or other forms of government intervention in the economy. Rather than innovate and provide better products at lower prices than their competitors, they would rather use the government to crush competition.

Another example of the harm of government intervention in the economy is inflation (the increase in the supply of money and credit). Inflation has numerous harmful effects. The most immediately apparent effect is the way it lowers the purchasing power of money. Like everything else, money is affected by the law of supply and demand. The more money in circulation, the less each dollar is worth; the less money in circulation, the more each dollar is worth. Thus, inflation devalues money, which means prices go up in response. However, prices don’t go up immediately and uniformly across the economy. When new money is created, those with strong ties to politicians get it first, before prices increase. By the time people in the middle and lower classes get the new money, prices have risen. This increase the cost of living, which is especially troublesome for those who have very little already. Further, inflation devalues money stored in savings accounts and similar types of accounts; anyone dependent on something like that is thus hit even harder by inflation.

Another negative consequence of inflation is the business cycle. This is the term for a great economic boom followed by a depression or recession. When the Federal Reserve engages in inflationary policies, it leads to a great misallocation of resources as a result of people taking on ventures they normally would avoid. New businesses open up, more jobs are created, and the economy takes off. But when the bubble pops, all of that comes crashing down, and the bad investments are liquidated during the recession. Since Herbert Hoover, it’s been standard procedure for presidents to intervene in recessions with the hopes of making them as short and painless as possible. However, intervening actually makes them longer and more severe; businesses take longer to recover and people can’t return to work as soon as they could without the intervention. So in addition to causing bad investments during the artificial boom (which deprives people of opportunities and products they could have had without the artificial boom), government intervention also hurts people during the inevitable crash.

Government policies have facilitated inflation. For most of US history, money was either made of a valuable commodity or backed by one. Precious metals such as gold and silver tended to be used because, among other things, they are scarce, durable, and retain their value over time. This kept inflation in check, reduced the frequency and severity of business cycles, and restricted the government’s ability to spend and expand its own power. Over time, however, money was gradually changed into the fiat currency we use today. Precious metals were phased out of coins, the amount of gold backing each individual dollar was reduced numerous times, and eventually the last remaining tie to the gold standard was severed. As a result of these changes, our money has already been significantly devalued and is being continuously devalued through inflation.

Now that we’ve looked at some problems, let’s examine some solutions. Drastic reductions in regulations, taxes, and fees would lead to more competition among businesses by creating a level playing field. Businesses would have to earn the support of customers through providing quality products at reasonable prices and would no longer be able to lobby the government for special favors that give them unfair advantages over their competitors. Returning to commodity money or hard money would ensure that money retained its value over time rather than lose it. Additionally, this would keep the cost of living in check and reduce the risk of economic recessions. If recessions still occurred, they could be quickly sorted out by politicians and bureaucrats keeping their hands off the economy and allowing the necessary correction phase to occur in as short a time as possible. Think about the economic growth and stability that would occur if these measures were put in place.

It’s easy to see that the cause of so many of today’s problems is not the free market, but the lack of a free market. Some great resources for learning more about these issues include “Economics in One Lesson”, “Meltdown”, “Capitalism: The Unknown Ideal”, and “End The Fed”. Anyone who’s concerned about the status quo and what the future will hold should do what they can to advocate for a return to a free market as quickly as possible. Some ways to do this include asking politicians to support steps towards more economic freedom, convincing other people of the benefits of a free market and encouraging them to get involved as well, volunteering with organizations that support economic freedom such as Americans for Prosperity, and refusing to vote for ant-free market measures at the voting booth. Those who take up such a challenge have a long road ahead of them, but with the proper dedication and strategies, it’s certainly possible to return to a free market and enjoy all the benefits that that entails. 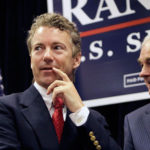