PETERSBURG, VA– When 19-year-old Devin Thomas saw his neighbors being arrested outside of his apartment complex, he decided to record it on his cell phone. Police approached him, ordering Thomas to go inside. Another Petersburg officer asks Thomas how old he is. Upon hearing that he’s nineteen, Thomas was charged by the officer and the phone dropped from his hand, but continued recording.

Thomas says he was beaten by the officer, and showed scars from the encounter to WTVR.

“They hit me in the side of my face with a club, and I was bleeding really bad,” Thomas told the station, saying the hospital diagnosed him with a concussion.

A photo taken of Thomas being led away in handcuffs helps to corroborate his story. As he’s being loaded into a patrol car, there is blood clearly visible on his face. 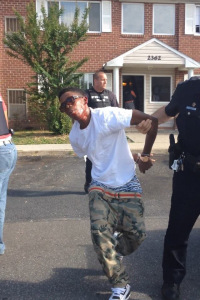 Police charged Thomas with disorderly conduct and resisting arrest, typical accusations for people who are victims of police brutality.

Nathan Cox of Virginia Cop Block has responded by organizing a peaceful protest to show officers that filming police is not a crime.

“They need to be aware that more and more citizens are filming the police, because it protects the citizen, it gives an objective perspective to an entire situation,” Cox said. “And camera’s don’t lie… It’s the best way to hold people accountable.”

Police stated they received one complaint related to the incident and are investigating.