Taxpayers in the United States said Obamacare risk corridors is the worst government mandate, according to Americans for Prosperity, a prominent conservative advocacy group.

In honor of tax day, the organization created its “Taxpayer Madness bracket,” taking into account tens of thousands of votes to determine which mandates were were the biggest hinderance to the country.

“After tens of thousands of votes were tallied in Americans for Prosperity’s Taxpayer Madness bracket, the verdict is clear: this tax day, the American public still overwhelmingly has ObamaCare on the mind,” the advocacy group said in a statement sent to The Daily Caller News Foundation Wednesday. “Risk corridors have been one indication of the crushing costs of this law…which the Obama administration was aware of all along,” the group said. “While those bailouts are fortunately on hold for now, taxpayers deserve for their lawmakers to reexamine the burdensome mandates and financial stress this law has foisted on individuals and families around the country.” 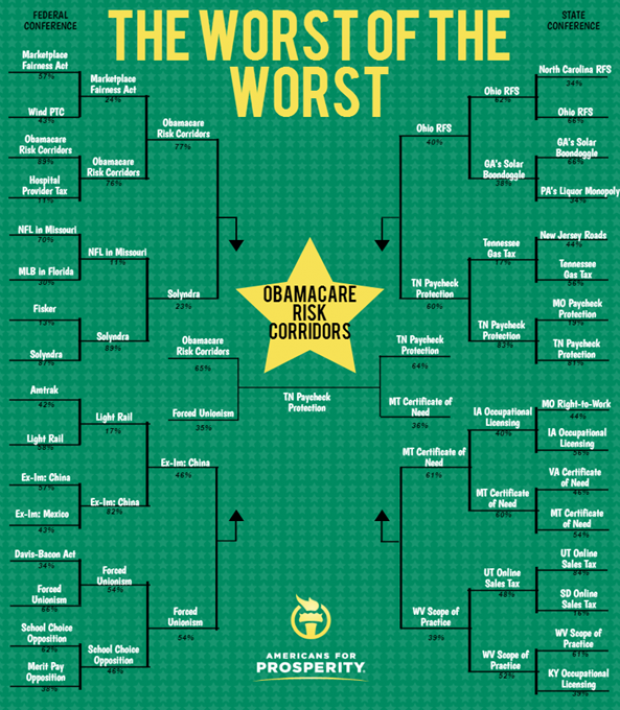 Obamacare managed to beat out forced unionism, Solyndra and Tennessee paycheck protection in the race for the uncoveted top spot.

“The risk corridor provision indicated that the administration knew all along the costs of this law were unworkable. To make matters worse, they expected Americans to pay on both ends: higher premiums, and more tax dollars for these inevitable bailouts,” Americans for Prosperity’s Director of Policy Akash Chougule said. “While conservative activists were thankfully able to pressure Congress into eliminating the bailout from December’s government funding bill, we should be vigilant about the administration looking for other ways to prop up insurance companies as the problems with this law become more apparent by the day. Arkansas is on the brink of becoming the first state to abandon the fiscally ruinous Medicaid expansion, state co-ops are collapsing left and right, and major insurers are less and less committed to remaining in the exchanges. In short, we’re watching this law come apart at the seams.”
Follow Juliegrace Brufke on Twitter

Feds Polluted A River With Lead And Arsenic, But Won’t Protect Locals