Islamic rights leaders say a chunk of bacon is the key to a Florida mosque vandalism.

The Council on American-Islamic Relations (CAIR) is demanding the federal and state law enforcement to investigate a Titusville, Fla., mosque vandalism as a hate crime after the suspect left behind a hunk of bacon. A video of the incident shows a man with a machete enter the mosque late New Year’s Day. He broke windows, tore down lights and left the bacon near the door of the worship center, which CAIR says is proof his motivations were anti-Muslim.

“People are afraid to take their children back to the mosque … ” Rasha Mubarak, the Orlando Regional Coordinator for CAIR told Florida Today.

It’s important to note that the FBI cut ties with CAIR because it is considered an unindicted co-conspirator in a terrorism funding scheme.

“The use of pork in an incident of this type is one clear indicator of a possible bias motive for the vandalism,” CAIR-Florida Regional Operations Director Nezar Hamze said in a statement.

The bacon attack is one of a string of similar incidents. Multiple mosques have been vandalized in recent months often with pork products left at the scene. Two California mosques were vandalized in December, both hit with graffiti and one with a fake grenade left in the driveway.  Someone left a severed pig’s head at this Philadelphia mosque in December.

Someone wrapped bacon around the door handle of the Masjid-e-Tawheed Las Vegas mosque in December. 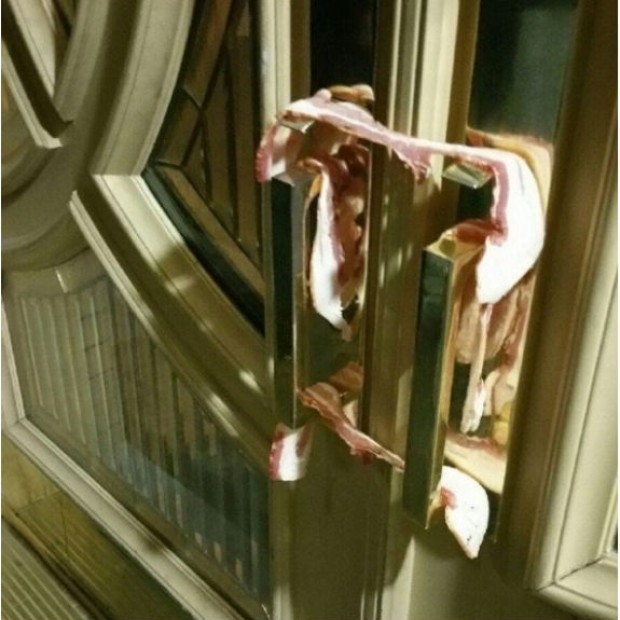 CAIR itself reported in April of last year that someone had tied bacon around the door handle of the building for their Edmond, Oklahoma chapter. A CAIR report found that more than 60 American mosques fell victim to vandalism, intimidation, or harassment in 2015, more than triple the number of incidents for the previous year.

“This vandalism of a sacred space comes in the midst of an election cycle that has given us the most public attacks on an American minority in living memory,” CAIR-Philadelphia Executive Director Jacob Bender said in a statement. “Attacks upon American Muslims should be, and must be, the responsibility of all Americans to condemn.”