We know it’s hard to believe, but apparently companies consider the cost of labor when picking locations for businesses.

Walmart is shuttering nearly 150 stores across the US and it’s no surprise that those that are getting axed are in areas with higher minimum wages.

“It can’t be a coincidence that Wal-Mart’s scalpel targeted stores in places that have among the highest minimum wages in the country,” explained Jed Graham in Investor’s Business Daily.

Oakland, whose $12.55-an-hour minimum wage is currently second to none, lost its one and only Wal-Mart. Los Angeles, which in June approved a gradual hike in the minimum wage to $15 an hour, lost its two Wal-Marts. One of them had opened in Chinatown in 2013, providing residents there a full-service grocery store after decades of trying to attract one. Los Angeles County, which followed the city’s lead in setting a path to a $15 minimum wage, lost a Wal-Mart that opened in 2013 in Altadena, an unincorporated part of the county where the wage hike will apply.

Of course liberals will sneer that Walmart hurts local economies– ignoring the jobs and low cost food, clothing, and medicine Walmart provides, as well as increased traffic to business areas. These local economies will feel the loss of their Walmarts.

The SFGate reported on the closing of the Oakland store:

In Oakland, employees and city officials expressed shock, and some speculated that the city’s minimum-wage law played a part in the decision to shutter the store there. The Walmart in San Jose, which also boosted the minimum wage, will shut as well. The two stores in San Leandro, which has no minimum-wage law that supersedes the state’s, will remain open.

“I think it really is a little discouraging,” said Oakland Councilman Larry Ried. “The minimum wage in the city of Oakland played a factor, was one of the factors, they considered in closing the stores.” The loss of Walmart deals a significant blow to Oakland as the giant retailer ranked among the city’s top 25 sales-tax producers.

Normally, when a major retailer has three stores along a 5-mile segment of a major thoroughfare and it decides to close one store, wouldn’t the logical choice be to close the store in the middle location so that it could best serve the customers in that area and minimize driving times, ceteris paribus? Seems like that would be the logical decision for a retailer like Wal-Mart, except that in this case the ceteris paribus condition doesn’t hold because the Oakland store is located in a jurisdiction where the minimum wage is $12.55 an hour, more than 25% (and $2.55 an hour) higher than the other two stores in nearby San Leandro where the minimum wage is $10 an hour. Given the reality that Wal-Mart operates on razor-thin profit margins (only 2.8% last quarter), a 25% difference in labor costs for entry-level workers can be the difference between a store that turns a profit and a store that barely breaks even, or loses money. 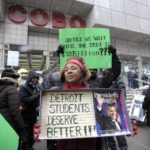 Detroit Schools Closed Because Teachers Refuse To Show Up