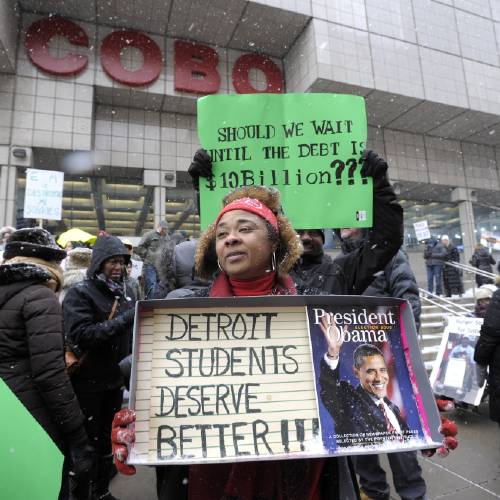 Almost every public school in Detroit is closed Wednesday because so many teachers have called in sick that the schools can’t function.

These so-called “sickouts” have consumed the Detroit Public Schools (DPS) over the past two weeks, forcing repeated closures, but Wednesday’s closures appear to be the worst yet, taking out roughly 90 percent of the city’s schools. The situation is so dire that, in the end, Detroit Public Schools found it easier to make a Facebook post listing the schools that were still open.

The sickouts mean that most of the district’s 46,000 schoolchildren will be forced to stay home. Because officially the teachers are all calling in sick, they can’t be fired or punished for skipping work or launching an illegal strike. Thus far, district officials have been unwilling to punish teachers suspected of abusing sick leave.

Instead of the flu, what Detroit teachers are actually “sick” of is large class sizes, decrepit buildings infested with rats and mold, stagnant pay, and a host of other issues. The teachers direct much of their blame towards Michigan Gov. Rick Snyder, who has placed Detroit under the control of an emergency financial manager in an effort to put its fiscal house in order. Recently, Snyder has proposed splitting Detroit Public Schools in two, with the new district initially having a state-appointed school board, as a means of coping with the district’s crippling financial burdens, in particular growing pension costs. While DPS’s finances are so bad the district may run out of money as soon as April, many teachers still strongly oppose the plan, saying meddlesome state management is to blame for the district’s catastrophic condition in the first place.

While the “sick” teachers have many grievances, the exact solution to the sickout crisis isn’t clear. It isn’t openly endorsed by the union and its informal nature means the striking teachers have no clear demands.

Wednesday’s sickout is almost certainly intended to coincide with President Barack Obama’s visit to Detroit for the North American International Auto Show. Members of the Detroit Federation of Teachers are planning to distribute leaflets at the event in an effort to raise awareness of the city’s educational dysfunction.

Besides the burden placed on Detroit parents by forcing them to care for students unable to go to school, it’s unclear how much damage the closures are actually causing. Detroit public schools are among the worst-performing in the country.