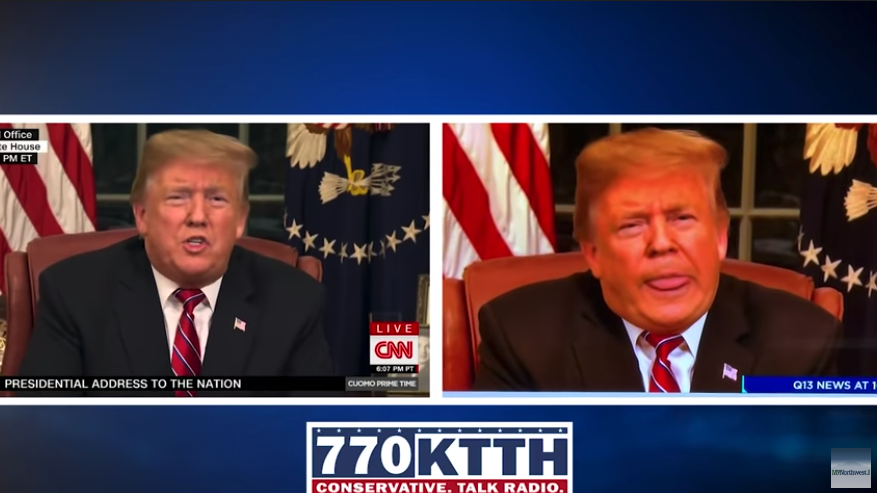 A staffer at KCPQ-TV in Seattle Washington has been fired after the station aired an altered video of  President Donald Trump’s speech from the Oval Office on Tuesday night. The video was changed to make the president look worse, as the Seattle Times reported.

“We’ve completed our investigation into this incident and determined that the actions were the result of an individual editor whose employment has been terminated,” KCPQ news director Erica Hill wrote Thursday in a statement to the newspaper.

The video was changed to make it look as if Trump was sticking out his tongue languidly between sentences.  In addition, the video was altered to make the president’s face look more orange.

During his speech on Tuesday,  President Trump said “Hopefully, we can rise above partisan politics in order to support national security,” before briefly licking his lips and continuing to speak. In the video that was broadcast Trump appears to let his tongue hang out, resting it on his lower lip for an abnormally long period of time.

The altered video was discovered by a listener to KTTH-Radio who brought the discrepancies to the attention of Todd Herman, a conservative radio host in Seattle, who compared the video to the original footage. “We performed a side-by-side comparison of the video from our listener, apparently taken by a smart phone recording of Q13, to the raw video of Trump’s speech from CNN,” Herman wrote on the station’s website.

In the raw video, the president briefly licked his lips and continued with his address.

“That comparison revealed the Q13 video creating a loop of the President licking his lips — making it seem bizarre and unbalanced — it also seems that someone distorted the President’s face and may have added an orange tone to his skin,”  said Herman.

The editor was placed on leave Wednesday after the station was made aware of the situation and less than a day later the staffer was quickly fired after a prompt investigation.

“We’ve completed our investigation into this incident and determined that the actions were the result of an individual editor whose employment has been terminated,” said Q13’s news director in a Thursday update.

“This does not meet our editorial standards and we regret if it is seen as portraying the President in a negative light,” Q13 told KTTH and MyNorthwest on Wednesday evening.