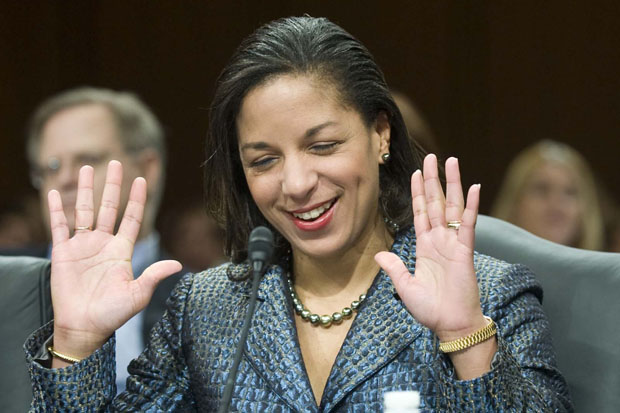 A report, which was first reported by conservative personality Mike Cernovich, has dropped a bombshell naming former UN ambassador under the Obama administration Susan Rice, as having been responsible for requesting the identities of U.S. persons in raw intelligence reports on dozens of occasions that connect to the Donald Trump transition and campaign teams.

Rice had been serving as the United States National Security Advisor from 2013 to 2017, under former President Barack Obama.

The intelligence regarding Rice was confirmed by “U.S. officials familiar with the matter” according to Bloomberg, but Cerovich, in his own post, explains in more detail that the intelligence was found by searching the White House Counsel’s document log requests which belong to Rice.

“The pattern of Rice’s requests were discovered in a National Security Council review of the government’s policy on “unmasking” the identities of individuals in the U.S. who are not targets of electronic eavesdropping, but whose communications are collected incidentally. Normally those names are redacted from summaries of monitored conversations and appear in reports as something like “U.S. Person One.”

The National Security Council’s senior director for intelligence, Ezra Cohen-Watnick, was conducting the review, according to two U.S. officials who spoke with Bloomberg View on the condition of anonymity because they were not authorized to discuss it publicly. In February Cohen-Watnick discovered Rice’s multiple requests to unmask U.S. persons in intelligence reports that related to Trump transition activities. He brought this to the attention of the White House General Counsel’s office, who reviewed more of Rice’s requests and instructed him to end his own research into the unmasking policy.”

Since reporting the information, Cernovich has condemned the “mainstream media” because he claims that they had the intel, but refused to run the story. He even tweeted out another story which played out in a similar fashion.

The conservative journalist, in his statement also highlighted that the Obama administration relaxed the unmasking rules, sourcing a report out of Circa, which said:

“The new order allows the NSA to share raw data and grants the NSA authority to share the information with minimal redactions, according to the copy of procedures.

Obama sought to expand those powers and take down the wall during his second term in office. The original executive order only allowed limited personnel – those with the highest levels of security clearances – to view the original raw data.

But the changes came at the end of his presidency. On Jan. 3, then Attorney General Loretta Lynch signed the expansion of the executive order, which had already been signed by DNI Director James Clapper in mid-December.

For many years the executive order didn’t draw a lot of attention, but NSA whistleblower Edward Snowden exposed its vast reach.”

Sen. Rand Paul has retweeted the story out of Bloomberg saying “Smoking gun found! Obama pal and noted dissembler Susan Rice said to have been spying on Trump campaign.”

According to his Twitter page, Cernovich will be holding a press conference on his Youtube channel sometime soon.

Susan Rice, who according to Bloomberg has not commented directly on the issue of unmasking, did claim last month, in a conversation with PBS that she knew “nothing” about the situation and the she was surprised by Chairman Nunes’ accounting of the incident.

Watch Sen. Feinstein Say That Disagreement Doesn’t Mean A Judge Shouldn’t Be on the Court