The provocateur and author of the upcoming book “Dangerous” Milo Yiannopoulos has recently been reported as being the keynote speaker at this year’s CPAC.

Controversial author and Breitbart News editor Milo Yiannopoulos will be the keynote speaker at this year’s Conservative Political Action Conference.

According to the Hollywood Reporter, which first reported the news, Yiannopoulos will focus his address on his “experiences in America battling feminists, Black Lives Matter, the media, professors and the entertainment industry.”

Yiannopoulos himself confirmed the news on his official Facebook page while citing the aforementioned Reporter article: 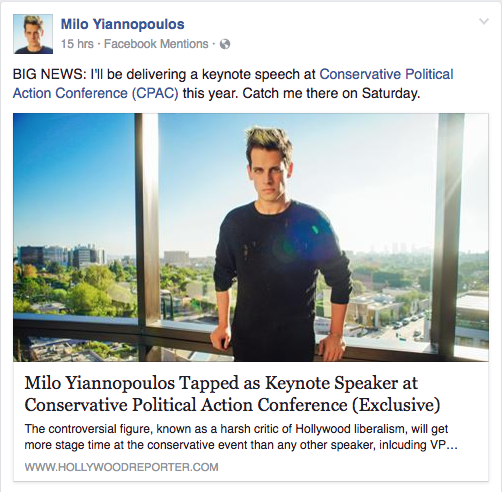 He was also quick to point out in a follow-up post that “Old-school conservatives are already mad. To say nothing of the Left.” In other words, Milo is fully aware of how against traditional conservatism he is by being an out and proud gay man. One of the more common criticisms often leveled at Yiannopoulos is that he’s just a self-hating homosexual who does the bidding of the old school conservative machine. But if he is truly not self-hating, and embraces the fact that he speaks for a new generation of pro-LGBT conservative youth, then he is… Well… “Dangerous.” Because he cannot be fit into a box and easily sized up by binary identity politics.

Having said that… CPAC just got a hell of a lot more interesting.