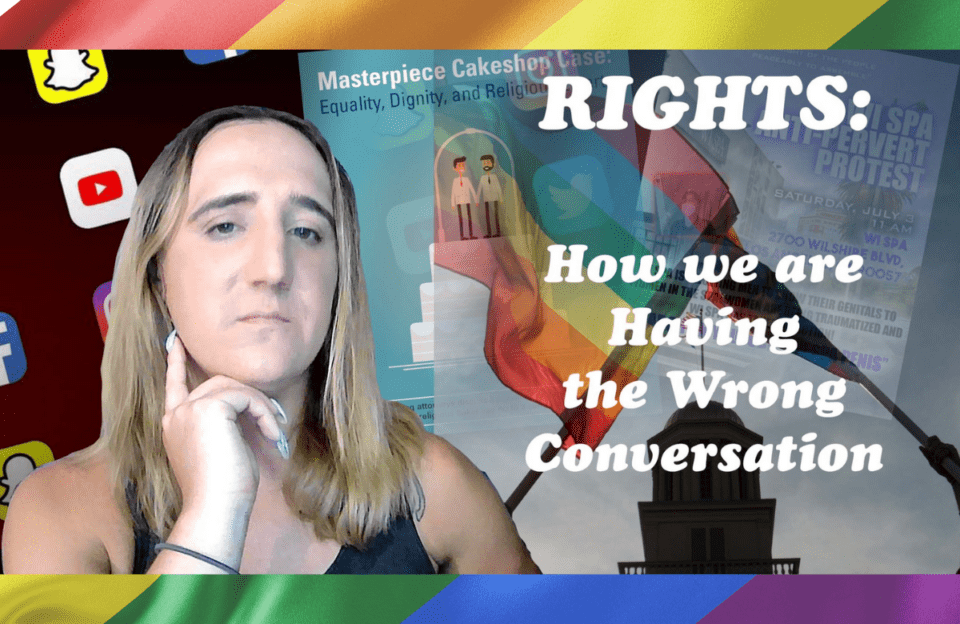 “Rights.” What are they really? Enshrined in the Constitution are basic inalienable rights that the government can’t take away. Depending on who you ask, you will get a wide range of answers. It is a word we hear people from all over the spectrum use wrong.

We always hear, “Healthcare is a right” or” housing is a right.” As a transsexual woman, I am always stuck in the middle of the fight on women’s “sex-based rights” and “trans rights.” But we ignore the people whose rights are actually being stepped on many times—business owners. If rights are inalienable, then it is impossible for one group’s rights to interfere with another. In the case of trans rights vs. women’s rights, women can create their own spaces without including trans people. Businesses can also create spaces and include trans people. It should be up to the business to make those rules and the free market can decide. We have to look at how government regulations have taken away the private property rights of business owners.

The first case we can look at is the incident at Wi Spa in California. Recently a pre-op trans woman was nude at the spa, in an area designated for women, and young girls were also present. As is to be expected, some female patrons had an issue with “male parts” being on full display in the women’s area. When trans people are afforded access to spaces that are not designated for their birth sex, we need to be respectful. This business owner should have had the choice whether to kick this person out or not, though we will probably never know the spa owner’s opinion. California’s Self-ID legislation says that no matter how you present, if you say you’re a woman you are to be treated as such. This business is forced under law to allow this person in the women’s section. The protests are taking place at the spa, when they should be at the state capital. Between this law and Antifa causing violence outside, if the owner objected they probably wouldn’t have a business anymore.

Then we have the Masterpiece Cake Shop in Colorado. The Supreme Court ruled that the owner of this shop could deny his art (a custom wedding cake) to gay couples for their wedding because of his religious objections to gay marriage. This was the correct ruling—but for the wrong reasons. This goes beyond his first amendment rights. An atheist should get the same ruling. As with before, a business should be able to deny service to anyone for any reason. We no longer live in the 1950s when segregation is a thing. We saw all over the place last year people saying “support black owned businesses.” We have seen the corporatization of Pride parades. I don’t think discrimination would be an issue on a grand scale. Basing this ruling on his religious rights probably caused more scrutiny of religious people than if they would have ruled it was simply his right as a business owner, period.

While on the subject of gay marriage… the government should have never been involved. Since homosexuality was made legal, LGBT people have been able to enter into a love contract. Unless you are religious, marriage is nothing but a contract, until you add government into it. In the US, government first established marriage licenses in the 1920s in order to prevent interracial marriages. The win for gay marriage only gave them the “right” for government to recognize that marriage and give you tax breaks—which I contend is discriminatory against single people. This ruling also perpetuates the belief that government can give you rights. No, they didn’t give gay people rights—they always had them. They were just afforded the ability to play the game.

Moving away from the LGBT issues, we have social media platforms. In most instances, I would say they are private businesses and they should be able to ban whomever they want from their platforms. However, these companies receive billions of taxpayer money in the form of government subsidies. This creates a clear conflict of interest. The government is able to use this money as bribes to circumvent the Constitution. These companies will silence the political opponents of whomever is giving them the money. We need to end all government subsidies. In the current arena though, if a business receives taxpayer funds, they should be beholden to the Constitution and the First Amendment.

This may be a completely new way of thinking for you. We hear the word “Rights” all the time, and often in the wrong context. Whenever the question of rights comes up, look at it closely. If it violates the rights of self/business ownership, it’s not a right. “Should” businesses discriminate? No. Should they be “allowed” to? Yes. The Market can do a much better job at self-regulating than the government ever could.

Sara Has a Business Degree from Central Michigan University. She is a Libertarian content creator, a Transexual woman, and a Military Veteran. She has her own Youtube Channel and has been featured on programs such as The KWOS Morning Show with Austin Petersen and John Marsh, as well as The Blaze TVs Slightly Offensive with Elijah Shaffer. You can also follow her on Twitter @Sara_H225.