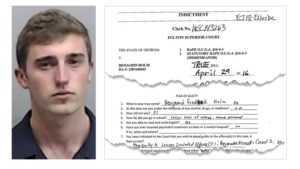 On the night of April 27, 2013, in Johns Creek, Georgia, the words, “No, stop,” were said to have been mumbled by an intoxicated female, confirming the assumptions made by witnesses that the sexual altercation occurring at the neighborhood playground was bereft of consent. The three girls gasped as they pieced together the quantity of alcohol the 15-year-old had eagerly consumed, her pants unbuttoned and yanked down her thighs, and their classmate Benjamin Holm, who was accused of blatantly ignoring her cries.

When the alleged victim’s father arrived at the gated community where the teenagers had been gathering for a party, his daughter’s state of intoxication spurred him to admit her to the hospital that night, where a sexual assault kit was arranged. Within 48 hours, the assault was reported to police, who went on to obtain an arrest warrant for Holm.

In just two weeks before Benjamin Holm would walk in his high school graduation, he spent a night in the Fulton County jail. After his $3,500 bond was paid for, Holm would continue on his path to Loyola University Chicago as a member of the golf team. While the university tracked his athletic statistics, the Fulton County District Attorney’s office would be upgrading Holm’s charges from a misdemeanor for statutory rape to a felony, adding the charge of aggravated assault.

It would be three and a half years before the trauma of April 2013 was settled in court. On November 28, Holm rescinded his original plea of not guilty and accepted the Fulton DA’s charges. He will serve 10 years in jail with a remaining 10 on probation. Jamie Utt, an advocate for victims of sexual assault, remarked that Holt’s conviction “is the exception,” to the way in which other rape cases in the news have been handled.

Rather than completing his bachelor’s degree in Business, or competing in regional golf tournaments, Holm will spend the next decade behind bars similar to those that had surrounded his alleged victim on the playground.

CA to Uber: Get Permit for Driverless Cars or Face Legal Action