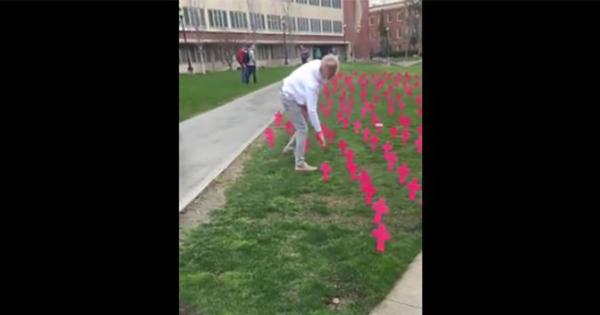 Shutdown tactics, destruction of property and aggression are becoming a staple of university disagreements, and the story continues with another pro-life display being repeatedly ruined by pro-abortion students at Washington State University.

Campus Reform is reporting that a pro-life display at Washington State University was destroyed twice by a student who was “angry” that it was “pushing a religious agenda.”

The Washington State University Students for Life group set up a “Cemetery of the Innocent” display with 300 pink crosses in honor of aborted children, said the report.

Keaton Aspell, a reportedly pro-abortion student, tore down the crosses and signs and threw them away, and after the student organization replaced the display, he once again destroyed it, according to Campus Reform.

“The responses I got were ‘thank you for doing it,’ ‘I really appreciate this,’ and ‘that’s disgusting what they are doing,’” Aspell told The Daily Evergreen, according to Campus Reform. “I don’t think it creates any type of unity. I think it just causes divisiveness and they are just pushing their religious agenda and it really made me angry.”

“I ended up talking to the police and I agreed that what I did was wrong because of course, they do have the right to free speech,” Aspell told The Tab after the video began to attract attention. “I apologized to them and them [sic] went to three different offices on campus to try and find out how they got approved because I still thought it was inappropriate.”

Aspell, according to Campus Reform, explained that he has received a lot of positive feedback from fellow students, even claiming “from a lot of girls, I’ve gotten personal messages and I’ve heard a lot of their stories and how they were afraid to stand up, how thankful they are for a guy to stand up for them.”

James Allsup, president of the College Republicans chapter at WSU, refuted the response that Aspell is receiving from some of his peers, saying that he should not be deceived into thinking that what he did was justified.

“Keaton seems to think that the opinions of girls he talks to are what determine whether behavior is acceptable or not,” Allsup told Campus Reform. “Regardless of this social validation he is getting from feminists and far left activists, destroying a memorial to dead children as he did is illegal and morally reprehensible.”

Nicole Manzione, a sophomore and member of the WSU SFL chapter, explained that “the display’s main purpose was to educate and inform people of the reality of abortion,” and that if anything the vandalism helped to achieve that goal, according to Campus Reform.

“The student who took it down was extremely angry and persistent to demolish our display on the grounds that it ‘made people feel bad,’” she said, but added that “since that day, many people have taken a stand for either side and we have reconciled with the student who destroyed our display. I think this is a success on our side because we got people talking about the consequences of an issue that has been around for so long.”

Aspell claimed he would do it again “in a heartbeat.”