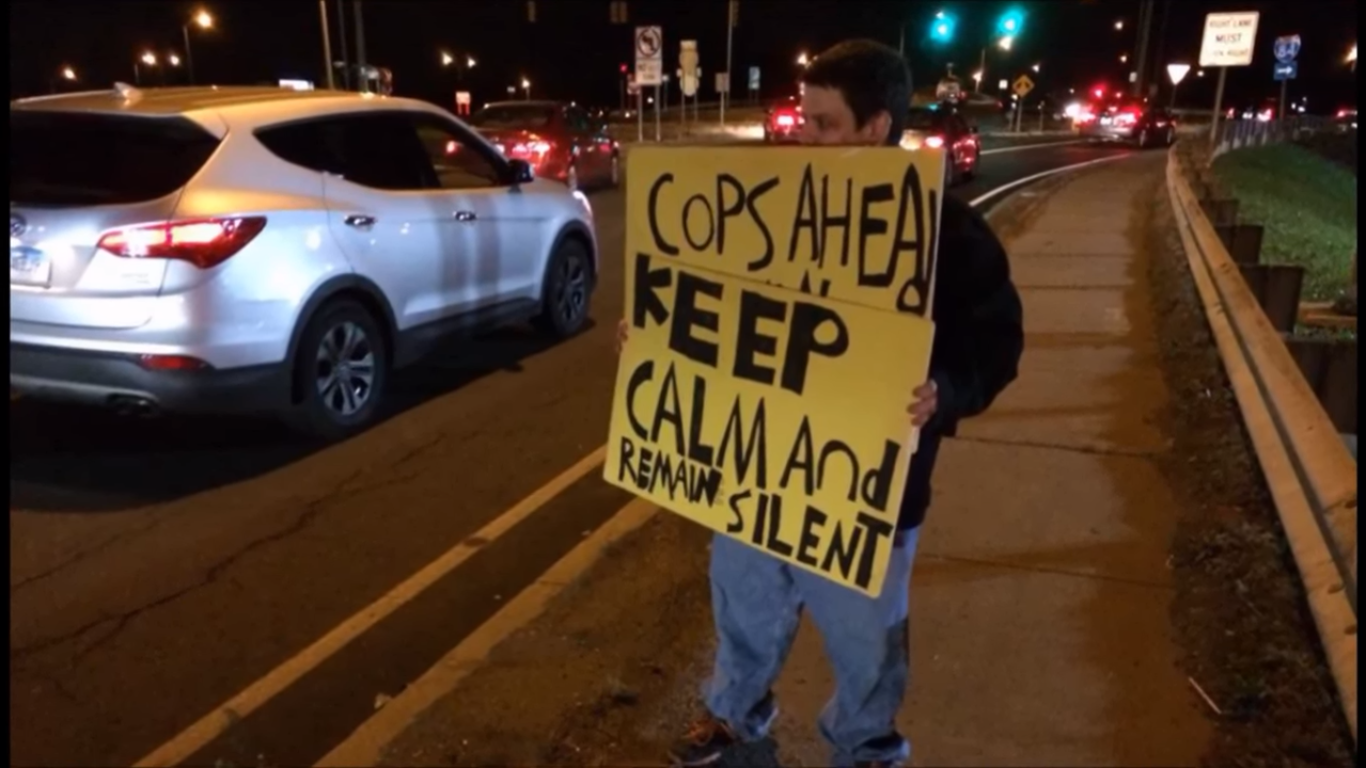 A man who claimed three Connecticut state troopers issued false charges against him while protesting a DUI checkpoint, was reportedly vindicated thanks to newly released footage from the man’s camera.

Michael Picard is now suing the three state troopers for violating his First and Fourth Amendment rights, according to the official lawsuit filed Sept. 15.

Picard has a history of researching where DUI checkpoints will be held, and will then protest the constitutionality. The practice  includes stopping people with no due cause, looking for people under the influence of drugs or alcohol.

On Sept. 11, 2015, Picard stood hundreds of yards before the checkpoint with a sign warning, “Cops Ahead: Keep Calm And Remain Silent.”

Picard is also a licensed concealed carrier, and often puts his gun in a perceptible holster to “educate people that it’s legal in Connecticut and that everyone has a right to defend themselves,” Picard says while narrating the YouTube video of the incident titled “‘Gotta Cover Our Ass.’ – Connecticut State Police.”

“Over the years as he has conducted his protests, he has become known to state and local police officers around Hartford [Connecticut],” the court document reads.

In a statement issued Friday, the Connecticut State Police Union asserted that Picard’s lawsuit is “frivolous and will ultimately be dismissed.”

The description of the YouTube video details the alleged incident in which he was allegedly “illegally detained, frisked and searched” and his “gun, permit and camera were seized.”

The very beginning of the video shows a state trooper wrestling a camera out of the recorder’s hands.

The officers claimed there were complaints about a man waving a fire arm and even pointing it at people. The lawsuit contends this claim is fabricated.

One trooper seemingly seized Picard’s camera, placed it on top of a patrol car, but did not turn it off.

“Unbeknownst to the defendants, Mr. Picard had been using the camera to record video and audio, not still photographs, and the camera continued recording until it was returned to Mr. Picard,” the suit reads.

After validating Picard’s permit for his firearm, one trooper was heard saying “do you want me to punch a number on this one? We gotta cover our ass.” The suit describes “Punch[ing] a number” as police slang referring to opening an investigation.

Another officer says “Crap. I mean, we can hit him with Creating a Public Disturbance,” and not too long after another is heard saying “Let’s give him something.” The troopers all continue to discuss their potential options, which appears to be them just concocting ways to validate the charges.

The troopers also considered having bystanders issue a statement pertaining to the man they allegedly saw waving a gun, but they could not find anyone willing to do so.

After the ordeal, Picard was given his device back, but was also issued two citations: one for use of a highway by a pedestrian and creating a public disturbance by “carrying an ‘exposed loaded side arm in plain view of passing motorists,” according to the suit.

Dan Barrett of the American Civil Liberties Union is serving as Picard’s attorney for the suit and told Ars Technica that this case would be almost impossible without the video evidence.

“It would be very tough. It’s not always the way police say it is,” Barrett said, according to Ars Technica.

Top 5 Reasons Not to Buy from an Animal Rescue