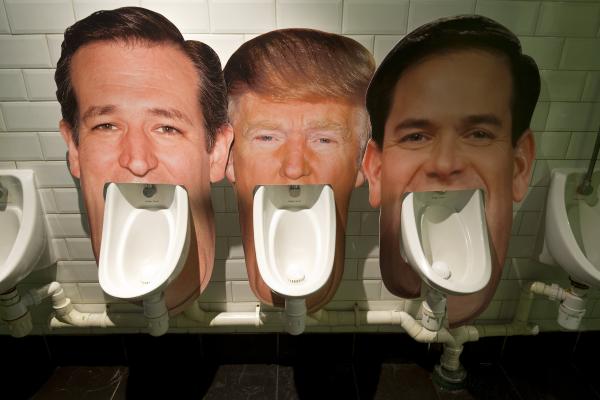 If you had the chance to urinate in the mouth of just one presidential candidate, who would it be?

That deeply philosophical question is being tackled by one pub in London.

The Three Stags in south London is hosting a “piss poll” for satirical British TV show The Last Leg. Since Feb. 26, three urinals in the men’s bathroom have been outfitted with giant cardboard cutouts of Ted Cruz, Donald Trump, and Marco Rubio. To cast their vote, customers simply urinate into the mouth of the candidate they hate the most.

After much outcry from the ladies, the pub even made accommodations so they can participate.

LADIES: you asked, we listened. You can now take part in the #pisspoll too! Head to the @thethreestags to vote. pic.twitter.com/U60dW8KNgw

So who’s winning the piss pole?

“90 percent of people, including me, pee in Trump’s mouth every time,” said pub owner Richard Bell.

I’m Voting for Both Presidential Nominees in November

MSNBC Trails Behind Hallmark Channel In Viewership After Election