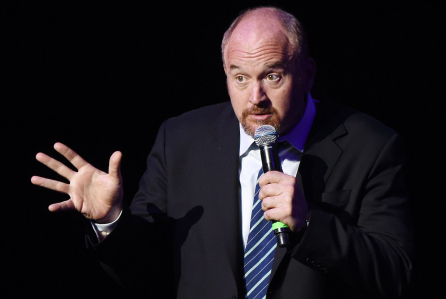 The comedy world has been set ablaze in time for the new year. It all started with Louis C.K.’s leaked open mic performance at the Long Island Comedy Club on December 16th where Louis unleashed a hilarious 45 minute commentary on his tumultuous 2018 experience. Throughout the set, the comic hit many of the PC buttons such as race and transgenderism – but the hot fuss, in particular, is about a bit he did on the Parkland Shooting Survivors:

“I’m a little disappointed in the younger generation, honestly. Because I’m 51 years old, and when I was like 18 to my 20s, we were idiots. We were getting high, doing fucking mushrooms and shit, and older people were like, “You gotta get your shit together,” and we were like, “Eh, fuck you!” And I was kind of excited to be in my 50s and see people in their 20s and be like, “They’re crazy! These kids are nuts!” But they’re not. They’re fucking neeeeh. They’re just boring, fucking telling, “You shouldn’t say that!” What are you, an old lady? What the fuck are you doing? “Neeeeh, that’s not appropriate!” Fuck you, you’re a child! … They’re like royalty. They tell you what to call them: “You should address me as ‘they/them’ because I identify as gender-neutral.” Okay. You should address me as “there” because I identify as a location, and the location is your mother’s cunt … They testify in front of Congress, these kids? What the fuck? What are you doing? You’re young, you should be crazy, you should be unhinged! Not in a suit saying, “I’m here to tell you …” Fuck you, you’re not interesting cause you went to a high school where kids got shot. Why does that mean I have to listen to you? How does that make you interesting? You didn’t get shot, you pushed some fat kid in the way, and now I gotta listen to you talking?”

Several blue check markers made quite a rabble over the bootleg recording including SNL’s own Pete Davidson, who surfaced to lead the charge against the comedic titan. The headline however comes from a Parkland Shooting victim’s parent, Fred Guttenberg, on New Year’s Eve with this tweet:

To anyone who knows Louis CK, please deliver this message for me. My daughter was killed in the Parkland shooting. My son ran from the bullets. My wife and I deal with loss everyday. Why don't you come to my house and try out your new pathetic jokes? https://t.co/tZI9ThSciR

Listen, I get it. The man lost a child, and that’s something I’ve neither experienced nor could fathom. But, my god, couldn’t Guttenberg have picked a less ironic way to go about trashing someone on social media? Of all the ways to roast someone for making light of senseless violence against a peaceful soul, I’m certain the most meaningful way is NOT to threaten senseless violence against a peaceful (yet sometimes creepy) soul.

Matter of fact, I think Louis’ point stands even taller after this. I mean, who the heck are you, Fred Guttenberg? You’re coming off as a real-life Ma Chalmers. Why should anyone give a crap what you think? Do you think your grief gives you license to start issuing violent (albeit empty) threats? Who are you? Why on earth should anyone listen to you about anything? I’ll tell you what, Fred, you’re just a dickless democrat cashing in your son’s memory for a blue check mark and a bunch of likes and retweets from your NPC followers. You built real estate on the corpse of your offspring and rented it out to Hollywood and the Mainstream Media for digital applause. And now you have the audacity to lecture (and threaten) a man whose talent you’ll never match about content produced in a field you know nothing about. Brilliant. I hope it’s all worth it.

Louis C.K. is and has always been a total G. You’re just mad because he’s not on your team anymore.