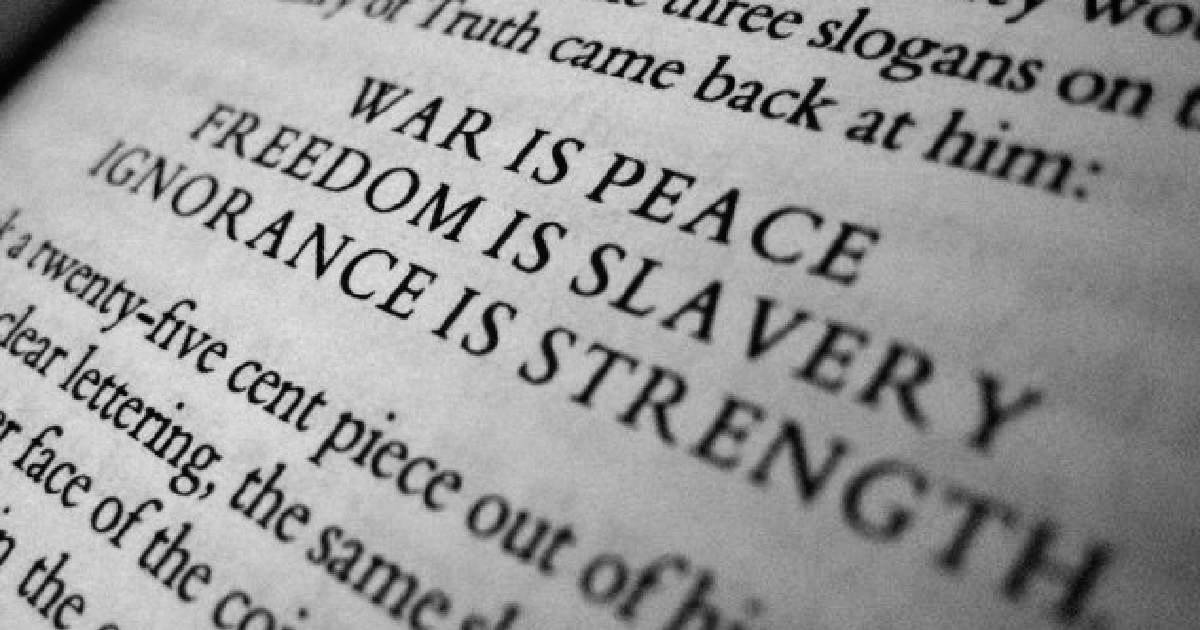 June 8, 2019, marks the 70th anniversary of George Orwell’s dystopian novel 1984. There will be no shortage of think pieces that will misinterpret its legacy. They will focus on social media, security cameras, data collection, and “fake news.” The problem? The novel was not a commentary on the downside of technology. It was meant to warn against the growing spread of communism.

In the decades since the time of its publication, the context of Orwell’s magnum opus has been lost. What remains in the cultural memory are simply fragments of the larger picture: government censorship, ubiquitous surveillance cameras, and Orwell’s clever neologisms (Newspeak, doublethink, and thoughtcrime, among others). This selective recall has led to a widespread misreading of the book’s original warning.

1984 Was about the Soviet Union

All of Orwell’s books were written with a message, and 1984 is no exception. He was one of the few literary voices on the left to recognize and speak out against the human rights abuses of the Soviet Union, and his fictional work draws heavily on the very real totalitarian regime of Joseph Stalin. The food shortages, government control of the press, militarization of culture, spying on citizens, and mass arrests and torture of supposed “enemies” were all part of life in Soviet Russia.

Orwell’s previous novel, Animal Farm, written in 1943, was rejected by British publishers fearful that its criticism of the Bolshevik Revolution would offend the Soviet Allies at a time when they were needed to help defeat Nazi Germany. It was not published until the war’s end, which infuriated Orwell. He feared that a failure of Western democracies to stand firmly against communism would result in a rapid capitulation, leading to the end of freedom as they knew it.

A quick online news search of 1984 will turn up no mention of the Soviet Union. It will, however, cue up endless articles proclaiming the fulfillment of George Orwell’s prophecies in the West. Unlike Animal Farm, which can be interpreted only one way, 1984 has become a Rorschach test, revealing more about the reader than the text.

From the left, most present-day articles and blog posts project the character “Big Brother” onto President Donald Trump, like Eliot Namay’s column in the May 6 edition of the Charleston Gazette-Mail. They typically focus on Trump’s fevered populism and his penchant for impulsive speech, which can lead him to play fast and loose with facts.

Sales of 1984 spiked dramatically after his inauguration in 2017 when White House Press Secretary Sean Spicer (incorrectly) touted the “largest audience ever to witness an inauguration.” Trump advisor Kellyanne Conway later defended the claim on Meet the Press, blurting out the now infamous phrase, “alternative facts.” Scores of news stories compared her gaffe to Orwell’s “Newspeak” and “doublethink.” It’s also fairly common to read comparisons of Trump’s rallies to the “Two Minutes Hate” depicted in 1984.

Comparisons from the right, on the other hand, generally focus on the politically correct speech codes of colleges and universities or on the massive data gathering of big tech companies like Facebook and Google, warning readers that “Big Brother is Watching You.” Kalev Leetaru explores both of these issues in his May 6 column in Forbes, where he compares the social media de-platforming trend to Orwell’s “unperson” status. Notably, sales of 1984 also spiked in 2013 after Edward Snowden leaked details of the NSA’s mass collection of internet and phone records. A slew of articles followed, asserting that 1984 had arrived.

A certain amount of hyperbole is a characteristic of today’s reporting and commentary, but current comparisons to 1984 are inappropriate. Again, George Orwell was writing about a specific regime. Big Brother was an obvious reference to “Uncle Joe” Stalin, a uniquely evil dictator. Trump has his shortcomings, but he is no Stalin. A president who is prone to exaggeration does not equal a government-controlled press (which the Soviet Union had). The “Two Minutes Hate” recalled Stalin’s public demonization of Trotzky, who dared to criticize Stalin’s tactics. Data collection is a growing concern, to be sure, but it doesn’t precede a terrifying knock on the door from the KGB.

The Correct Comparison Is to Communism

This is not to say that Orwell was wrong. He was, in fact, quite prescient. The story he told in 1984 played out in communist dictatorships around the world in depressingly predictable ways. The food rations are sparse and miserable in Orwell’s future world, and food shortages or famines have been a consistent feature of communist countries. Ukraine, China, and Cambodia experienced forced famines directed at specific populations, but the entire Communist Bloc experienced periodic food shortages due to failures of central planning. North Korea’s famine of the late 1990s killed nearly 5 percent of their population, and Venezuela has experienced a continuous shortage of food since 2010.

Mass surveillance? North Korea leads the pack, with three government organizations employing over 200,000 informants dedicated to spying on their own citizens. China is preparing to go full 1984 with the rollout of the “Social Credit System,” supported by facial recognition technology.

As an author and journalist, Orwell was especially concerned about the suppression of speech and the rewriting of history, both of which the Soviet Union perfected. North Korea censors all outside press, as most Soviet satellites tried to do. On May 31, CBS News reported that the Chinese government was arresting anyone associated with the 1989 Tiananmen Square protests in anticipation of the 30th anniversary of the massacre. References online were quickly deleted by government officials, and public mention of the events was forbidden. Now that’s a memory hole.

Freedom must be guarded vigilantly, and citizens are right to complain about data collection that skirts the bounds of privacy or a president who is careless with the truth. To compare our open society to the police state envisioned in 1984, however, is lazy and reckless. It minimizes the suffering of those who have lived—and those who continue to live—in the totalitarian nightmare Orwell envisioned.

Shawnna Morris is a wife and mother of two. She is delivery courier and author at Cold War History blog.

Green Rush: How Hemp Is Growing the Economy and Transforming American Farming

Screaming During an Argument: Populism Shows Why Intent Is Not Sufficient