There is only one true reason that we have been able to keep this diverse republic together for over 200 years: we don’t kill the opposition.

That is what they do in other countries—not here. Not us.

This is what happened yesterday in Chicago:

And here is a collection of incidents that occurred elsewhere around the country: 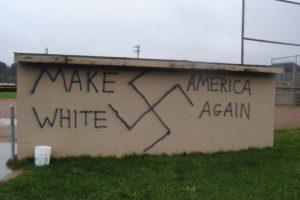 Several writers had predicted that violence would ensue after the bitter election of 2016, but our political leaders do not appear to be aware of the anger that is churning below the surface. What happens if it boils over? What if the Facebook harassment and the Twitter wars and the video vitriol spills out of our devices and goes viral in our streets?

Obama is hosting Trump at the White House this morning, and it would be a good thing for them to appear together and condemn post-election violence. It would be more than a good thing. It is a necessary thing.

Hillary Clinton has posted some positive tweets since her election loss, and I would hope that those who supported her—and even those who did not—would reflect a bit on her words.

Most Americans are accustomed to election disappointment. This year is a bit different. The rhetoric has been more hateful than in the past. The acrimony has been internalized. The emotional investment has produced hysteria.

And the party establishments have been defeated, but the rival factions remain intact. Hillary’s wing isn’t planning for the next election and Trump’s wing isn’t considering how their actions will affect his ability to govern. They want a go at each other. And this could be disastrous.

What is left is for the President and the President-elect to address the nation—together—to disavow violence and let the United States once again demonstrate what a peaceful transition of power looks like.

Exit Polls: Donald Trump Did Not Win the Election Because of Immigration