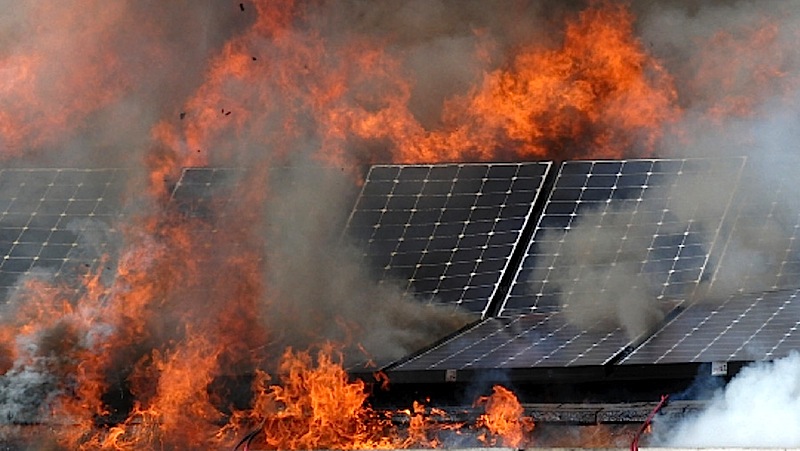 The world’s largest solar energy plant known for incinerating birds just got a taste of its own medicine. A fire at the plant Thursday morning, which may have been caused by “misaligned” mirrors used to reflect sunlight at boiler towers, broke out in the facilities interior — literally scorching parts of the plant.

NRG Energy, the company operating the Ivanpah solar plant in southern California, was forced to shut down one of its generating towers and is investigating if mirrors, or heliostats, failed and torched a boiling tower. Now, the plant which got $1.6 billion from the Obama administration, will only be able to generate electricity from one of its three towers.

An NRG spokesman said it’s too early to say exactly what caused the failure, but it’s likely due to misaligned heliostats, according to Gizmodo. Whatever the cause, workers and firefighters literally went through hell to douse the flames.

A small fire was reported yesterday morning at the Ivanpah Solar Electric Generating System (ISEGS) in California, forcing a temporary shutdown of the facility. It’s now running at a third of its capacity (a second tower is down due to scheduled maintenance), and it’s not immediately clear when the damaged tower will restart. It’s also unclear how the incident will impact California’s electricity supply.

Putting out the blaze was not easy task, either. Firefighters were forced to climb 300 feet up a boiler tower to get to the scene. Officials said the fire was located about two-thirds up the tower. Workers at the plant actually managed to subdue the flames by the time firefighters reached the spot, and it was officially extinguished about 20 minutes after it started.

The scorched tower is currently shut down, according to the Associated Press, and it’s not clear when it will come online again. It’s also unclear if this setback will affect California’s electricity supply.

This only adds to Ivanpah’s troubles. The plant was nearly shut down by California regulators for not producing nearly as much power as it was supposed to. Regulators have given the plant until the end of July to meet its power quotas, but this fire may make it hard for the plant to meet its goals.

Ivanpah only generated 45 percent of expected power in 2014 and only 68 percent in 2015, according to government data. And it does all this at a cost of $200 per megawatt hour — nearly six times the cost of electricity from natural gas-fired power plants. Interestingly enough, Ivanpah uses natural gas to supplement its solar production.

It wasn’t long after the plant opened, its operators asked the federal government for a $539 million federal grant to help pay off the $1.6 billion loan it got from the Energy Department.

Environmentalists quickly attacked the project for killing thousands of birds since it opened. Many birds were incinerated by the intense heat reflected off Ivanpah’s heliostats.

The Associated Press cited statistics presented by environmentalists in 2014 that “about a thousand… to 28,000” birds are incinerated by Ivanpah’s heliostats every year.

“Forensic Lab staff observed a falcon or falcon-like bird with a plume of smoke arising from the tail as it passed through the flux field,” according to a U.S. Fish and Wildlife Service report from 2014.

Ivanpah — which is owned by BrightSource Energy, NRG Energy and Google — uses more than 170,000 large mirrors, or heliostats, to reflect sunlight towards water boilers set atop 450-foot towers that create steam to turn giant turbines and generate electricity.