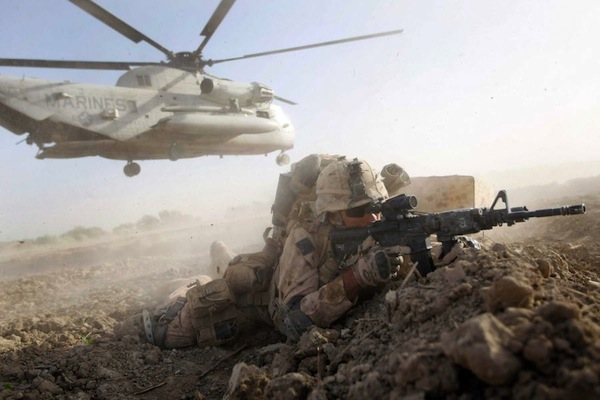 America’s longest running military conflict shows no signs of ending soon. Secretary of State John Kerry has brokered a deal that will keep American soldiers in the Afghanistan till at least 2024. While Afghan leaders will meet to deliberate the security pact, America has insisted that immunity for crimes committed by US soldiers in Afghanistan be part of the deal. The agreement keeps at least 7,000 US troops in Afghanistan well beyond the promised 2014 withdrawal.

Iraq War veteran and anti-war activist Michael Prysner told Russia Today that US desire for permanent military presence in the war-torn nation and immunity for US soldiers is exemplary of colonialism. “They won’t agree to any pact that doesn’t include immunity for the criminal acts,” Prysner said. “Which is a fundamental foundational feature of colonialism.” He also pointed out that this pact represents another broken promise from President Barack Obama, telling RT “soldiers and their families were promised this 2014 withdrawal deadline.”

Much concern has been raised by Afghan leaders over US raids into homes. Afghan President Hamid Karzai tried to alleviate concerns, stating that “American forces for military operations will enter Afghan homes only in exceptional and extraordinary cases.” Yet despite his assurances, Karzai has indicated that he will not sign the security pact, instead deferring the responsibility to the next Afghan President, who will be chosen next April. It’s a move that may put the deal at risk, as the US has indicated a strong desire to have the agreement hammered down soon. The final details of such an agreement are still unclear, but Kerry denied that any type of apology from President Obama regarding “mistakes” made by the US military was on the table, as some of Karzai’s people have indicated.

While Karzai may simply want to defer the pact to the next president because the agreement would extend far beyond the remainder of his term, his remarks seem to indicate a reluctance due to mistrust. “My trust with America is not good. I don’t trust them and they don’t trust me. During the past 10 years I have fought with them and they have made propaganda against me,” Karzai told Reuters. Karzai even warned that Afghanistan needed to cooperate with the US to avoid negative consequences.  “We want this pact in order to move out of this unsteady situation,” Karzai said. “If the foreigners leave unhappy, it will be very dangerous for us.” [contextly_sidebar id=”24818fbde7f961afd01f4fde50238804″]

Afghanistan’s 2,500 member national consultative council will now deliberate on the pact and may make some changes. However, it is clear that further US troop presence and immunity for those troops has to be part of any deal the US will agree to. Failure to secure immunity for US soldiers led to forces being withdrawn from Iraq in 2011.

With the Taliban long since defeated, the twelve yearlong occupation of Afghanistan already seems wasteful and drawn out. Americans are weary of the conflict, with only around 28% saying they believe the war was worth fighting. In addition, a dramatically rising price tag of $2.1 Million to keep one soldier in Afghanistan for one year, has made America’s longest conflict America’s costliest conflict.

Is the Obama administration vying for permanent positioning in Afghanistan, like the US enjoys in South Korea, Germany and Japan? Only time will tell, but the broken promise he made to Americans of a 2014 withdrawal is his latest unpopular move in what is becoming an increasingly embattled second term—No matter how White House spokesperson Jay Carney may spin it. “The war in Afghanistan will end next year, as the president has promised,” Carney said. “The combat mission will be over.” The occupation mission doesn’t appear to ending anytime soon.

Keith Farrell is a frequent contributor to The Libertarian Republic and Founder and President of Spirits of ’76 national nonprofit organization. He holds a BA from the University of Connecticut in American Studies, with concentration in political science, and Urban and Community Studies. Follow him on Facebook.

The Democrats Don’t Want To Call It Obamacare Anymore (VIDEO)