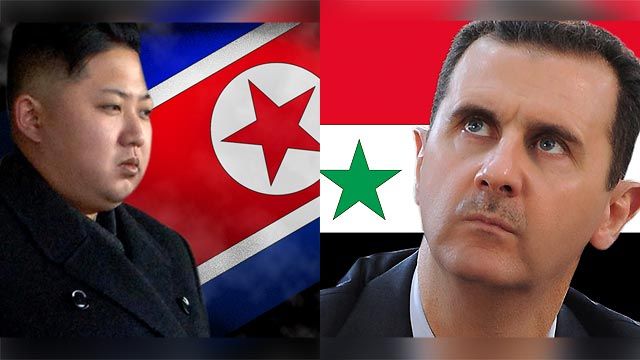 Much ado was made these past two weeks on all sides of the political spectrum, and all of it over the legality and the morality of the US Navy’s strike on a Syrian Airbase. Many groups and nations backed Donald Trump. The UK, Germany, Canada, France, and, according to the President, even Xi Jinping’s China supported the decision.

The word was that Assad had used chemical weapons, and as a result, he must feel the sting of good ol’ American Justice. Russia and Vladimir Putin, however, were less than happy with the decision. Their allied coalition of Iran, and Syria threatened aggressive actions should the US cross the “Syrian red line” and attack government forces again.

Finally, Trump’s own base turned on him. The likes of Nigel Farage, Marine Le Pen, and Milo Yiannopoulos voiced disappointment in Trump for his sudden reversal on what had promised to be a presidency without regime change maneuver.

Within a week, the announcement came that the US Navy was positioning for war. A carrier strike group in under way, en route to the Korean peninsula, and Navy SEALs allegedly training to “take out” Kim Jong Un.

Since the 1950’s, China has supported the North Korean regime, yet this week rejected coal shipments from the hermit state, opting for American coal instead. The Daily Mail reported that 150,000 Chinese soldiers had deployed to the North Korean border, and the series of events indicates a possible change of sides for the Chinese.  The North Koreans have threatened to strike America and her allies in the Pacific with nuclear weapons, though the extent to which this would be successful in questionable. US missile defense systems are in place, and the DPRK has only a very limited supply of functional missiles, and may not have the capability to turn them into warheads.

In summary, the United States has struck Syria, and is threatening to strike North Korea. At home, the interventionism alarm bells are sounding over both, yet the alarms for North Korea seem much quieter. The reason is extremely technical. The Syrian conflict has not seen American lives directly threatened. There have been no attacks by the Syrian Military on US assets. Thus, an attack against them requires a declaration of war, and there was no such declaration. Trump pulled off a unilateral act of war, in response to an alleged gas attack, without an investigation as to who actually used the gas. It screams “Iraq” all over again. No proof has come forward that Assad used chemical weapons, and when one thinks critically about the situation, it seems absurd that he would do so given the obvious consequences of such a decision. Therefore, the Trump strike is legally wrongful.

North Korea, however, is an enemy of the state. No peace has been signed, only a ceasefire. For over 60 years, the United States has been in something of a cold war with the country. The Koreas, both backed by a superpower, have been unable to fight one another successfully because each time one gains the upper hand, their ally turns the tide. Now, Trump seems to have persuaded China to join the American side of the conflict. Given the state of war, Trump can order attacks on Syria without congressional approval at any time. In Korea, nuclear weapons and ICBM’s are being tested, weapons that could directly threaten not only US allies, but the mainland itself. Kim Jong Un has expressed a desire to destroy America in a nuclear holocaust.

Assad and Kim are not the same beast, because this is two different kinds of interventionism at play. In North Korea, deposing Kim Jong Un would mean an end to the war, an era of peace in Asia, and probably better relations between the United States and China. In Syria, deposing Assad would be the beginning of yet another war, and one that may involve Americans fighting Russians directly for the first time in history. We would be starting a war, not finishing one. Therefore, the defeat of North Korea is an acceptable intervention, while unconstitutional attacks on Assad are inexcusable.