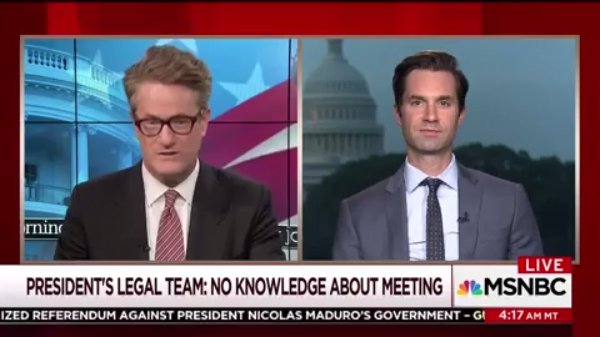 MSNBC’s Joe Scarborough called the Hannity Show on Fox News “state run television” Monday, as he was accusing Donald Trump Jr. of deception regarding his meeting with a Russian lawyer for dirt on Hillary Clinton during the campaign.

“With all the President’s men around him, coming back from Europe, lying to The New York Times,” Scarborough said, referring to Trump Jr. “Lying to the American people, saying this meeting was just about adoption? And then the next day lying about the people that were in it. Then going on a TV show that basically is state-run television and being asked at the end of that TV show, is there anything else that we don’t know about. And Don Jr. saying: that’s it!”

The “state-run” reference is a dig at Sean Hannity, who interviewed Trump Jr. Tuesday regarding the meeting.

Scarborough and Hannity have traded insults via twitter and in their respective monologues. Hannity has poked fun at Scarborough’s relationship with his co-host Mika Brzezinski and mocked Scarborough’s band and hairdo.

Sex Robots Are Here And Could Change Society Forever