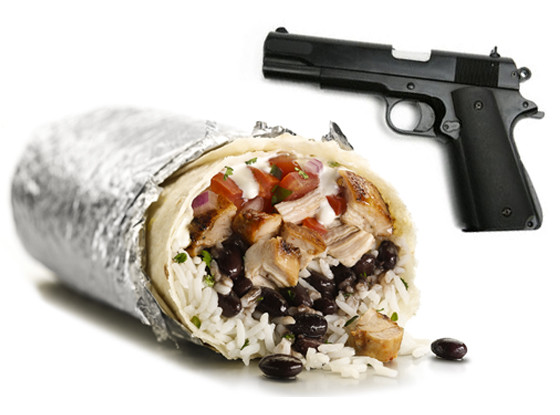 TULSA, OK – Despite recently crowing over their non-victory of getting Chipotle’s corporate office to agree to request gun owners forgo their Second Amendment rights in Chipotle franchises, anti-gun group Moms Demand Action were thrown out of a Tulsa franchise after harassing open-carry activists.

Members of the anti-gun group were soliciting signatures around the store after being rebuffed from the local farmers market when members of the Oklahoma Open Carry Association approached.  According to one of the open-carry activists, despite attempts to engage in civil debate, members of MDA accused the activists of wanting to start a war with police and alluded that the activists were untrained rednecks unconcerned with shooting indiscriminately.

The police were summoned, but the responding officer expressed his support for legal open carry and actually posed for a picture with the activists.

When the manager refused, the MDA activists began snapping pictures of the open-carry activists.  The manager then asked the MDA members to leave, as they were harassing paying customers who hadn’t given their consent to be photographed on the premises.

TLR Editor’s Note – This seems perfectly relevant to this story:

‘Come and Take It!’ Texas family fights to save treehouse from city