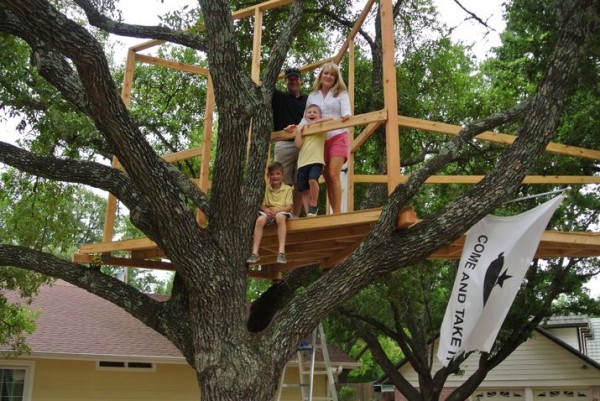 AUSTIN, TX–Glen Ridge Drive is the site of an unlikely mini rebellion. A flag made famous by the Battle of Gonzales, the birthplace of the Texas revolution, waves proudly from a treehouse that the city of Austin is trying to take down. The Meroney family and their neighbors challenge, “Come and take it!”

It all began when Griffin, 6, and Cal, 7, started watching Treehouse Masters on Animal Planet. They were so blown away by the designs that they begged their parents to build them an “awesome treehouse” too. “This was 100% for the boys,” says mother Shannon Meroney.

So, father Mike Meroney spent the next four months building his boys their dream treehouse whenever he could find the time. But on May 7, Meroney was given a notice by a city code compliance officer informing him he did not have a permit and was violating city code.

The treehouse lies 13 feet up between two tall oaks in the Meroney family’s front yard, but the city believes it’s in their right of way. Mike disagrees, saying that there are no power lines involved and that the treehouse doesn’t interfere with trash pickup, since he puts his trash can in another spot on the curb.

The stricter enforcement of city codes in Austin could be due in part to its rapid expansion. 21,000 people moved to the state’s capital between 2012 and 2013, and local residents are not pleased with all of the condominiums going up that now block the city’s skyline.

With construction occurring on such a massive scale citywide, a small treehouse on a family’s property seems of little importance, but the city refuses to retract its threats. Mike Meroney joked that making his kid’s treehouse an endangered animal sanctuary could help its chances of survival.

“Maybe I ought to get a yellow-breasted warbler or salamander from Barton Springs or the lesser prairie chicken from West Texas,” he said.

The Meroney’s are taking action in other ways. They’ve created a Facebook page called Save the Front Yard Treehouse, and a petition has been signed by all the neighbors on the two-block street. The issue has unified the community, with neighbors throwing barbecues under the treehouse. Despite this support, it’s unlikely the family will be able to save the front yard treehouse.

“The kids in the neighborhood were excited about playing in it,” Meroney said of the incomplete project. Finishing it would be an expensive and lengthy process, stymied by bureaucratic red tape.

“They were not very specific because they said there really wasn’t a treehouse permit,” Shannon said. “They said we could apply for a variance, but it would involve several city departments and probably would require us to buy an insurance policy that would indemnify the city.”

“They haven’t given me any true path forward,” Mike lamented, adding that a city arborist might even be required to inspect the treehouse.

City spokesman Kyle Carvell justified the city’s move, saying “There is not a height or depth limit to the right of way. City staff review and issue license agreements on a case-by-case basis in an effort to ensure the safety of all residents.”

Mike disputes this, saying he was told by a city right-of-way official that the city’s right of way goes up to 17 feet. The prospect of tearing down the treehouse is sad, but it seems imminent in the “progressive” city of Austin.