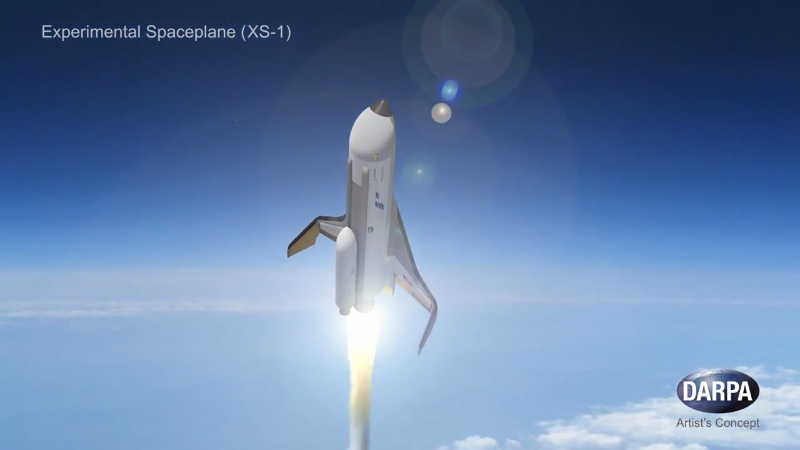 The Defense Advanced Research Projects Agency (DARPA) has selected Boeing to conduct design and build the military’s next hypersonic spaceplane, according to an announcement Wednesday.

The unmanned Experimental Spaceplane (XS-1) can lift a payload into orbit and return to Earth to land on a runway. DARPA hopes the XS-1 can launch Department of Defense (DOD) satellites into low Earth orbits with only a few days’ or hours of notice. Current rockets take months to launch satellites.

“There is a unique opportunity to disrupt and transform the satellite launch process as we know it today, creating a new on-demand space-launch capability that can be achieved more affordably and with less risk,” Boeing spokeswoman Cheryl Sampson told The Daily Caller News Foundation.

“The availability of advanced composite manufacturing capability and streamlined launch systems has created an opportunity to bring aircraft-like operations to the launch business and pursue a new approach,” Sampson said. “The capability would offer government and commercial customers more flexibility to launch more quickly and test new technologies in space.”

The XS-1 will have vertical launch capabilities, unlike the Air Force’s current X-37B unmanned plane that relies on Atlas V rockets to launch. The XS-1 will be roughly the size of a business jet, but capable of reaching hypersonic speeds over Mach 5 to allow the plane to reach suborbital altitudes.

“Boeing selected the Aerojet Rocketdyne AR-22 engine for this next phase as it offers a flight proven, reusable engine to meet the DARPA mission requirements,” Sampson said. “For the XS-1 program, Aerojet Rocketdyne is providing two engines with legacy shuttle flight experience to demonstrate reusability, a wide operating range and rapid turnarounds.”

DARPA predicts that the XS-1 could operate with costs under $5 million per launch. In comparison, some of NASA’s Space Shuttle launches cost $1.5 billion while the more modern Falcon 9 rocket created by the private corporation SpaceX costs $54 million per launch. If the program is successful, DARPA plans to develop commercial spin-offs.

DARPA did not return requests for comment on potential civilian uses for the XS-1 technology to TheDCNF.

“The XS-1 would be neither a traditional airplane nor a conventional launch vehicle but rather a combination of the two, with the goal of lowering launch costs by a factor of ten and replacing today’s frustratingly long wait time with launch on demand,” Jess Sponable, DARPA program manager, said in a press statement. “We’re very pleased with Boeing’s progress on the XS-1 through Phase 1 of the program and look forward to continuing our close collaboration in this newly funded progression to Phases 2 and 3—fabrication and flight.”

Reusable space technology is considered a major advance because it has the potential to lower the costs of getting into orbit, which are high due to expensive rocket components. America’s now decommissioned Space Shuttle was only technically reusable because scientists discarded its giant fuel tank after each launch, and its side boosters were parachuted into corrosive salt water. This required them to be extensively refurbished after use, making the Space Shuttle extremely expensive.

The Air Force has already vowed to invest $6.6 billion into protecting satellites over the next six years, and could spend upwards of $10 billion on space operations from combined public and classified budgets last year, according to The Air Force Times. Theoretically, XS-1 could allow the military to replace satellites taken out of operation by an enemy faster than they could be shot down.