Well, it’s official – Gary Johnson and Jill Stein will not be included in the official televised presidential debates. In other words, the majority of the country will once again remain blind to the choice it actually has, and be given a false narrative on what is actually going on in the political world. Nobody, and I mean nobody, should be okay with this. No matter your political allegiances, biases, or personal feelings on Johnson himself, this is a travesty for all voting Americans. It is a signal that the media is bought and paid for, and that the powers that be in this country do not trust their own citizens enough to make the right decision to allow the full spectrum of candidate offerings to be truly represented. Why would any of us find that to be okay?

But beyond the mere principle of the insult, there is a practical application that helped keep the two-party monopoly from being challenged this year: the third party spoiler candidate that was Green Party nominee Dr. Jill Stein.

I wrote about Dr. Stein previously as a possible spoiler candidate for Gary Johnson, and Stein actually responded to that piece on Twitter in an attempt to shut it down. It backfired: 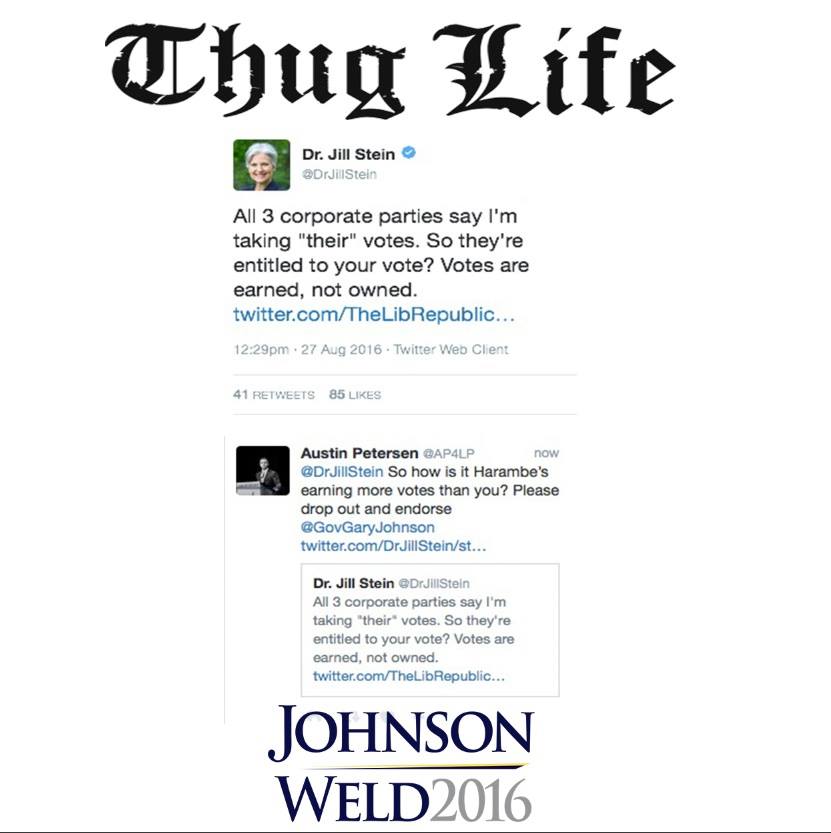 But even at that point, the argument that Stein was a spoiler for Johnson was purely hypothetical. We had not yet seen solid proof that she was taking enough of the poll numbers away from Johnson to truly harm him. Well, now we can indeed confirm that this was the case. Dr. Stein’s poll numbers, while dismal, were indeed large enough to have carved into Johnson’s final percentage points before the Presidential Debate Commission finally made the call that he hadn’t made the cut.

Now, was this process rigged? Of course – of the five latest polls that were used to make the final determination of where Johnson’s numbers were, three of them were handled unethically. CNN’s poll underrepresented voters under 30, Fox News’s poll excluded millennials altogether, and NBC’s poll hadn’t even surveyed new people for literally months. These polls deliberately took their hands off the pulse of the real American voter public and in the process pushed a false narrative, and to say this had nothing to do with Johnson’s low numbers and ultimate exclusion from the debates would be highly ridiculous.

However, it cannot be denied that specifically because such lengths are being gone to by the establishment to silence any dissenting voice at every turn, anyone truly concerned for the future of the country and the ending of the two-party system should be putting said issues before oneself and banding together in order to finally topple the machine. Jill Stein didn’t make it on the ballot in all 50 states. Not even close. Her poll numbers were not close enough to the debate commission’s 15% threshold to warrant remaining in the race after a certain point. And yet, she chose to stick around anyway and pull more votes from independent voters who might otherwise have voted Johnson simply because he would become the principled candidate by default. Jill Stein and Gary Johnson are not all that different in terms of what principles they claim to stand for and how much power the current political system should have. If Jill Stein truly cared about shaking up said system, she would have done as Austin Petersen suggested and drop out to support Johnson. After all, the point of all of this is to wake people up; not set up a vanity ticket for oneself and miss out on what was likely a once in a lifetime opportunity to change things for the better in the long run. This election cycle was like no other, where both major party candidates were almost ubiquitously hated. Now, come 2020, the battle for third party recognition will be all uphill once again. We blew it. And Dr. Stein is implicated in this failure as well.

When the Government Actually Should Actively Fight Greed

Why Hillary’s “Medical Records” Release Should Alarm Us