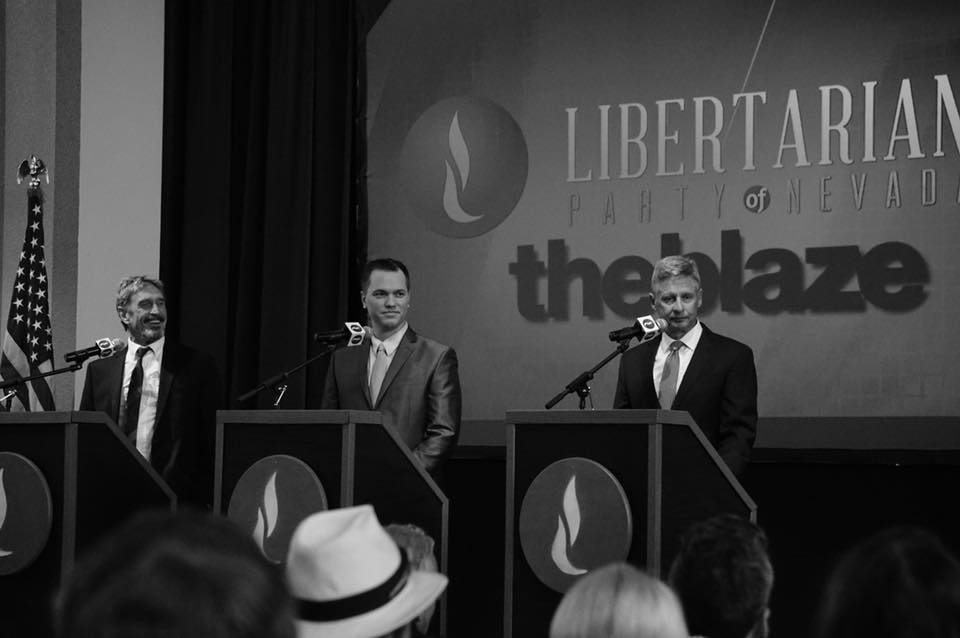 Petersen, Johnson & McAfee Face Off One More Time Before The LP Convention

The last Libertarian Party presidential debate before the National Convention took place on Monday in Las Vegas. I was fortunate to be able to attend, and managed to “live-tweet” the experience extensively.

The event was hosted by the Libertarian Party of Nevada and moderated by Penn Jillette, with proceeds going to support Opportunity Village, a charity which provides aid and opportunities for the intellectually disabled.

The presidential candidates in attendance included two who were not invited to participate: Darryl Perry and Kevin McCormick. The three who debated were Governor Gary Johnson, Austin Petersen, and John McAfee. The format included brief introductions by each candidate individually and alone with a specially tailored question for each, then all the candidates were brought on stage for questions asked in a variety of formats.

Local candidates and audience members asked the next few questions, and the final round was a “lightning round” which provided both insight and laughter.

The candidates each had their highlights and their shortcomings. The following summaries are entirely editorialized with my candid impressions of each candidate.

Austin Petersen, as always, gave beautifully crafted answers that sound like he’s prepared them by reciting them into a mirror and knows just how to deliver them for greatest effect. Whether that’s a good thing or bad thing depends highly on your point of view. He toed the party line as he tends to, spoke eloquently and definitely gave the best answers to a handful of the questions asked. He calls himself a grassroots candidate, and his articulate and empathetic response to a local candidate who asked him how he’d raise money and grow the party was powerfully in touch with the experience of trying to reach as many people as possible on a shoestring budget.

He managed some zingers as well, familiar to those who’ve followed him closely on social media.

"Build a wall around Donald Trump and make Bernie Sanders pay for it." -Austin Petersen #lpdebate

"I'd like to stop the militarization of our local police forces. That's my gun control." – Austin Petersen #lpdebate

Petersen’s a little bit too fond of memes and internet speech, with a comment wrapping up one of his answers that was literally “Austrian economics for the win!” I may begin referring to him as the LOLcat for Liberty. However overall, he gave the most consistently strong performance between the three candidates. I differ strongly with his stance on reproductive choice, which was a glaring difference between himself and the other candidates, but besides that position, I was tremendously impressed with his performance.

There was, of course, another stir of controversy as a question regarding religious freedom laws (and if they endorse discrimination) came up and each candidate had to answer. When Johnson said he didn’t believe the Libertarian Party should be engaged in promoting any kind of discrimination, Petersen attacked Johnson, suggesting that he’d force pastors to marry gay couples.

The situation became momentarily a bit loud and confusing, and Jillette had to ask them to calm down.

Honestly, this scene in the debate, and the “Nazi cakes” one that occurred during the Stossel debate, worries me for the Johnson campaign. I understand that he’s busy suing the debate commission to be allowed in the mainstream debates to begin with, but I worry about his actual ability in a debate with Clinton and Trump. He was hit on this issue during the Stossel debate and has not formulated a better response to the premise of the question.

The fact is, when hit with a question about “would you force pastors to marry gays?” this shouldn’t be hard, simply as a student of history, not even as a libertarian. I swear, liberals would get this question right, because they love walls between church and state.

Loving v. Virginia invalidated laws prohibiting interracial marriage, similarly to Obergefell v. Hodges and churches and pastors were never required to marry interracial couples. Churches can choose their membership and their standards by which people can marry – some require counseling, that there have been no prior marriages, never been divorced (hello, Catholicism), even interracial or same-sex couples.

Johnson’s appropriate response to a question like this could be to simply state that bringing the topic up is virtue signaling on over the top hypotheticals. Of course, churches can be as bigoted as they want to be. People don’t go to a random church looking for a pastor to marry them and complaining if they say no for any reason — if you seek to get married in a church, you typically have a relationship with the clergy and community, and already know exactly what they think of your partnership.

There are so many better prepared answers to this line of questioning, and whether he stands for or against freedom of association, he needs to get better at articulating it, especially before he goes up against people like Clinton and Trump.

I do appreciate that Johnson wants to be inclusive and avoid the Libertarian Party looking like defenders of bigotry, but he’s not particularly great at parsing out the differences between society and the state, whereas Petersen has been very careful to advocate a personal intolerance for bigotry and a political tolerance for freedom of discrimination/association.

Johnson made a few great points – his commentary about cannabis and being the highest (excuse my pun) member of government to advocate legalization in 1999 and still today, was well articulated and compelling. In general his responses fell along reasonably Libertarian lines, with a few comments that seemed particularly prepared for the left or liberal audience he may be courting.

"Candidates should wear NASCAR jackets with who paid for them." – Gary Johnson #lpdebate

On whether government should stay out of foreign entanglements, he reiterated that we should only go to war if attacked, but he’d “hate to be asleep at the wheel if another Holocaust was happening.”

Then there were some odd comments on whether government should fund science research like:

"Government could offer prizes for scientific achievement, like a billion dollars for a cure for cancer." – Gary Johnson #lpdebate o.O

Overall, Johnson’s performance in the debate was the most disappointing to me. I hope he gets a better debate coach, especially if he wins our nomination and manages to secure himself in the mainstream debates with Clinton and Trump.

John McAfee seemed to be on a particularly anarchistic spree on Monday, with comments that got a rousing response from some anarchist audience members. His opening remarks cited the fact that he’s a man of risk, and how that’s suited him and led to success in many endeavors.

McAfee did have his falters — he’s the only candidate I saw Jillette actually have to cut off for having far too long a reply to a question, and he had a very strange train of thought regarding relationships between people. The answer was long enough I literally forgot the question that was being asked, but I think it had to do with LGBT rights, and I recall listening as he veered off course in his answer moving to commentary about minimum wages before wrapping it beautifully back up with [paraphrased] “the government should have no place in our relationships — any kind of relationships we have.”

"The govt has turned inward and now we are the enemy." -John McAfee #lpdebate

McAfee’s performance during the lightning round of questions was entertaining and skillfully pulled off. For most of these questions the candidates inevitably had similar answers — “should marijuana be legalized?”, “should birth control be available without a prescription?”, and several other questions basically had all the candidates either answering in the affirmative or the negative, but it was entertaining to watch them each attempt to carve out a response that wasn’t the same as the others – following “no” with “hell no”, and things like that.

Asked whether the US should leave the UN, Petersen answered “yes”, Johnson answered “no – it’s a diplomatic avenue” and McAfee simply answered “what is the UN?” to laughter.

I’d posit that McAfee won the lightning round, as he became eternally quotable — should marijuana be legal? “Legalize everything.” End the war on drugs? “End the war on everything.” Should the government fund stem cell research? “Government should fund nothing. Period.” As well as other answers like, “If I had my way, the Federal Reserve would not exist,” and “I’d rather drive a nail through my foot than accept eminent domain.”

"Everything should be available without a prescription." -John McAfee #lpdebate

McAfee’s debate performance certainly veered from rather esoteric musings of a genius who seems impatient with this whole process, to stories that all seemed to begin with “this one time, when I was in a third world country…” His closing remarks included his disdain for debate formats, explaining that the audience has learned nothing at all from prepared replies in a controlled format — and offered that we should show up with cameras while he’s in bed, or he and his wife are having an argument, and see how he responds then.

I think many of us may have learned a lot from the debate — it certainly raised my impression of Petersen, and lowered mine of Johnson. One of these three men will likely be our LP nominee, and going exclusively on this debate, I’d say I’m most interested in watching McAfee or Petersen on a main stage against Trump or Clinton, so I implore Johnson to work on his weaknesses, deliver at the final debate at the convention, and may the best man win.

Ultimately, I found this debate more fun to watch than the Stossel one (granted, I was there in person for this one), but I look forward to seeing the entire debate aired on The Blaze this weekend (check your local air times/place here), and I think this is the best race for the LP nomination I’ve seen in a long time.