“Fiscally conservative and socially really don’t give a damn,” stated Gary Johnson in an interview with MSNBC in late June. “As long as you don’t force me into believing what it is you believe. Let people have choices in life.”

After months and months of criticism, Johnson finally buckled. He modified his long-time slogan “fiscally conservative, socially liberal,” to make room for social conservatives who might consider libertarianism if it meant retaining their social values in a personal sense.

Vital in moving Johnson from A to B was former presidential candidate Austin Petersen, who strongly criticized the governor’s infamous line. In fact, Johnson’s new line was almost copied word for word from Petersen.

Unfortunately, this new version is problematic as well. It does not properly describe libertarianism and is a poor way to market the liberty movement.

‘Fiscally Conservative’ Is Just as Wrong As ‘Socially Liberal’

The problems with calling libertarians “socially liberal” are quite manifest to those who are knowledgeable about the liberty movement. For one, social conservatives are prevalent. Ron Paul, Tom Woods, and Andrew Napolitano are all social conservatives but are still libertarian because they do not believe in forcing their views on others. Furthermore, a number of positions typically deemed “socially liberal” are in fact not libertarian, such as prohibiting business discrimination.

Meanwhile, the problems with calling libertarians “fiscally conservative” may not be so obvious at first glance. After all, there is not a plethora of individuals in the movement calling themselves “fiscally liberal.”

Nevertheless, just like the “socially liberal” label, “fiscally conservative” is an inaccurate descriptor. It’s true that conservatives want to reduce taxes and cut government spending and debt. But how many want to completely eliminate the income tax? How many want to drastically cut spending? How many want to end the Federal Reserve and legalize competing currencies? Libertarians have some disagreements on the degree to which they’d do such things, but even the moderates are far and away from typical* fiscal conservatives.

Fiscally conservative” in no way reflects the radicalness of the libertarian desire for freedom from government [. . .] In fact, the term does nothing but suggest tweaking the system at the edges. To a true libertarian, it is calling for nothing but an aspirin taking regime in a battle against cancer.

Further problematic is the fact that many fiscal conservatives are concerned more about eliminating the debt than reducing taxes. This leads to so-called “austerity” policies where taxes are often raised in an attempt to diminish the debt, rather than taking a more extreme approach to cutting spending. Libertarians, meanwhile, have a moral opposition to taxation. In comparison then, fiscal conservatives are more like glorified accountants, caring about being “prudent” or “frugal” when the real issue is the unethical use of violence against peaceful people.

No, It’s Not Good from a Marketing Perspective

“Okay, it’s somewhat misleading,” a skeptic might say, “… but don’t we need to speak other people’s language in order to persuade them? Isn’t it a good thing if we point out our similarities?”

It’s true that it’s good to empathize with people and find areas of agreement to expand on. However, this can be done without using Johnson’s slogan. Phrases such as ‘limited government,’ ‘free markets,’ ‘private property,’ and ‘economic liberty,’ are all part of the common voter’s lexicon and are far more accurate.

Another common defense of the “fiscally conservative, socially whatever” line (and its predecessor) is that candidates need succinct talking points to express their beliefs since media only gives limited time for responses. Though candidates can use some of the phrases stated above, here are some other alternatives:

‘Libertarians believe that individuals have a right to do what they wish with their body and property, as long as they harm no one else.’

‘Libertarians believe it’s wrong to use violence against peaceful people.’

Like all talking points, these too need to be elaborated on for full precision. However, they are far less misleading about what libertarianism is.

What many don’t realize is that a movement’s talking points and catchphrases strongly determine the sort of people that join it. Here’s an easy example: if a third party spent the next 20 years acting like hardcore leftists, talking about equality of opportunity, a right to healthcare, and increasing taxation and regulations, it’s no surprise that the sorts of people that would be attracted to that message would be those who already had a disposition to the left.

Likewise, if the Libertarian Party acts like centrists, the very sort of people it will attract are those with a predisposition to the center. Unfortunately, that’s exactly what the party is doing when it uses the “socially liberal” and “fiscally conservative” labels. The latter by itself retains that problem, but to a lesser degree.

Here’s what happens in picture form. Americans are led to believe libertarians are here: 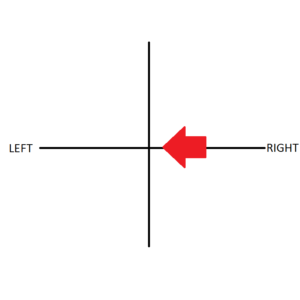 When true libertarians are actually here: 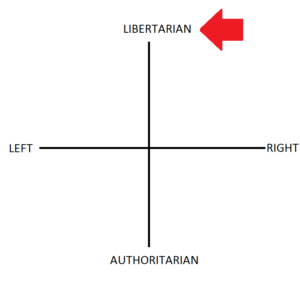 The Libertarian Party is not the party in between Barack Obama and Mitt Romney. It does not exist on the left-right spectrum, but on the libertarian-authoritarian spectrum. Libertarians have their own philosophy and their own ideal: a belief in liberty.

This is not an exclusionary message. Libertarians should accept anyone from anywhere. But those people should not be confused about the party’s message from the get-go.

The Libertarian Party ought to be proud of that.

*There is a group of conservatives that believes in ending the Federal Reserve, eliminating the income tax, drastically cutting spending, etc. However, sadly, this is a minority in today’s conservative movement.

Watch Out Uber, Elon Musk is Getting Into the Ride Sharing Business