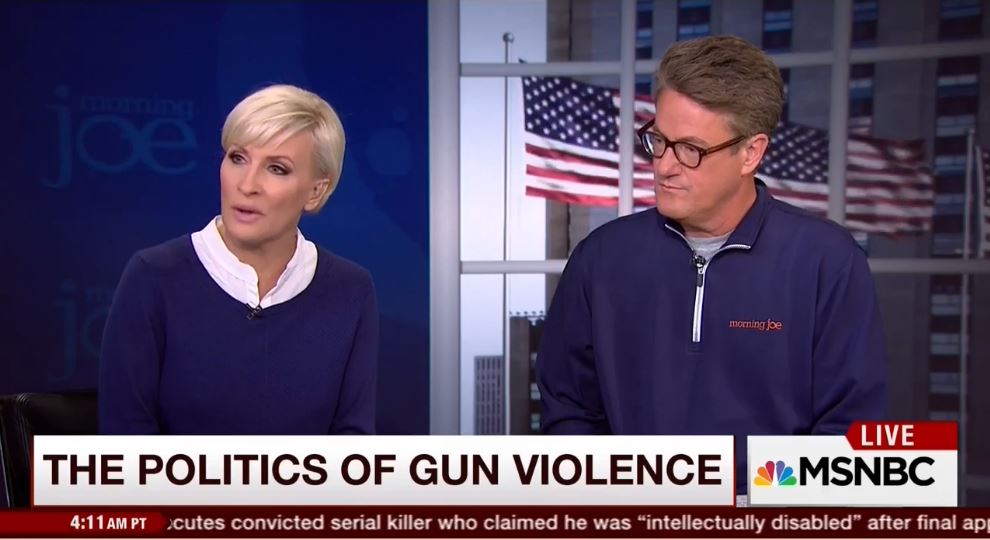 Charles W. Cooke of The National Review stumped an entire panel of liberals on MSNBC’s “Morning Joe” hosted by Joe Scarborough. The right wing pundit pressed the panel to name one policy that would have prevented tragedies like the recent shooting in Oregon. The panel of gun control advocates, which included Bloomberg’s Mark Halperin, Howard Dean, and Mika Brzezinski, scoffed and stammered but was unable to provide a substantive answer to Cooke’s question.

Only Howard Dean was able to offer a specific policy proposal which he mused “might be helpful,” but his suggestion would not have prevented the recent tragedy. In fact, no legislation can, despite the president and vice president’s desire to play politics on the matter.

Check on the video here, transcript provided by The Daily Caller below

Charles C.W. Cooke: It’s a huge challenge. Look, until he started running through straw men and clichés everything Joe Biden said is true. It is of course hideous to lose a child; everyone is upset about it this. But this is not a competition to see who was vexed. This is a public policy debate. Joe Biden doesn’t know how to fix this problem. I don’t know how to fix this problem. I think it’s fair to say you don’t know how to fix this problem [to Howard Dean]. It’s a very complex question in a country with 300 to 350 million guns on the street. And the way they talk, is as if they have the answer and there are just these recalcitrant forces in the country that say, “No, no, no.” Even though somewhere deep down, they know their legislation will work. That’s simply not the case, It’s far more complicated than that.

Scarborough: It is really complicated. Mark Halperin, we see it time and time again. It’s as Willie said last hour, I support background checks. But they have background checks, they had background checks in Oregon where this took place. Connecticut passed a lot of very aggressive gun control laws after Sandy Hook that were supported by most of the people in Connecticut. But if you look at the actual Sandy Hook shooting, none of the gun laws would have stopped what happened in Sandy Hook. We seem to keep chasing our tail here, and sometimes there are no pat answers for these very difficult problems.

Halperin: There’s no question it’s difficult. I want to engage Charles a little bit in a civil way. You know, everyone in the country in a leadership position — journalism, politics, et cetera — should have a thirst and a hunger and a passion to try to come up with solutions. To just talk about how other people’s solutions won’t work or this is a sociological issue, I don’t think that’s enough. I completely agree with the president. People need to find solutions to this and not talk about what won’t work and that it’s so complicated. We can’t be the only country in the world that’s like this.

Cooke: Well, then, with respect, what’s your plan?

Halperin: Well, I think that finding solutions are short term in terms of legislation, state and federal. But then also —

Cooke: But what solutions?

Halperin: To coming up with ideas, I think —

Cooke: But which ideas, Mark?

Halperin: I think some — well, we can talk about specific policies in a second, but let me finish the second point. You know, you say part of the issue involves young men. Well, again, public policy people should come up with ideas longer term to try to deal with the question of what is causing young men to do this.

Cooke: OK, but we both agree that they should. So you don’t have anymore ideas than I do. I think that is what we have established.

Halperin: But I’m, but I’m, I’m not an expert in the field. And again, I want to be civil. I’m not trying to criticize or attack you. All I’m saying is I listen to your tone, it’s about, “This is complicated, the other side’s ideas won’t work, this is not just about young white men.” I just think, I want everybody in the country that has a public voice to be saying, “We passionately need to be find solutions to this, not talk about how complicated it is.” I’m not a policy expert, and I’m a journalist not here to weigh in on particular provisions. But to say we need passion to solve this, not talk about complexity and talk about how the other side’s ideas aren’t any good.

Cooke: Well, it is complex, and it is difficult. And there are no ideas —

Mika Brzezinski: So we should try nothing then, Charles?

Brzezinski: Well, what are you saying? You’re basically saying, “No one has the answers, no one can do anything about it, so let’s not do anything.”

Cooke: What I’m suggesting is that Mark Halperin and President Obama and Vice President Biden and now you keep saying we need to do something —

Brzezinski: Yes, we do.

Brzezinski: I could think of a number of policy ideas that I think are worth trying, and I think you would hate every single one of them. But I’d rather try than do nothing at this point.

Cooke: Well, possibly, but at least we could have a debate over those. What is it that your proposing?

Cooke: What is it that you’re proposing?

Brzezinski: I agree with the vice president, sorry.

Cooke: But he didn’t make a proposal.

Sorority Selfie Girls Did Something Amazing