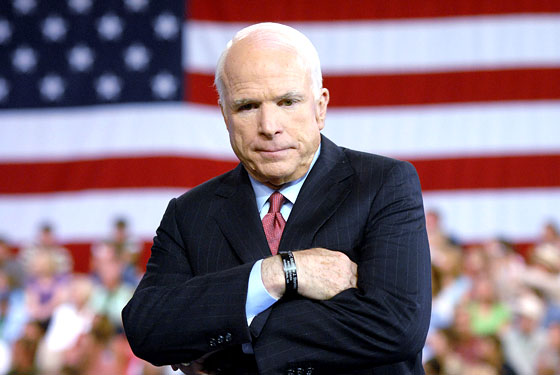 During an appearance on CNN’s “The Axe Files,” host David Axelrod inquired on whether he saw a parallel between the two entertainer-turned-politicians.

“No, I don’t,” McCain replied, citing Trump’s policy on Russia, adding he finds his handling of the relations with the country alarming.

He went on to praise Reagan’s action to fight communism, adding he disagrees with Trump’s statement there are similarities in the way the United States and Russia govern.

“To state that there’s some moral equivalency between an imperfect nation — that’s the United States of America — and Vladimir Putin is appalling,” he continued. “And I think it’s pretty clear that there’s a difference between, well, aren’t we killers and the guy that stood there and said, ‘Mr. Gorbachev, take down this wall.’”

This is not the first time McCain has spoken out against Trump’s stance on Russia.Earlier this year, he and South Carolina Sen. Lindsey Graham encouraged the president to place sanctions on the country for attempting to interfere in the 2018 election.

He told Axelrod he believes damaging the “fundamentals of a free and open sociey,” is more damaging than a bomb or destroying a building.