TLR: This is Gary Doan and talking to Jo Jorgensen. She’s best known for being Harry Browne’s running mate on the ’96 Libertarian presidential ticket and is currently running for the nomination, herself. Jo, thanks for talking with me.

JJ: Oh, thanks so much for the interview. I appreciate it.

TLR: Yesterday was Super Tuesday where Biden outperformed expectations and is currently in the lead against Bernie. What is a better outcome for the Libertarian Party: a Biden versus Trump race or Bernie versus Trump race?

JJ: I don’t really see much of a difference. We’ve got two older white men… I think what is important is that the Democratic Party has always tried to portray itself as a home for minorities, women, for people who are down on their luck. People who, with the help of government, can make their lives better. And that’s not what we’re seeing in the actual party. We’re not seeing people who’ve been helped up from the inner city or helped up from racism, who are now running for president or at least in the lead for President. We see the same thing in the Democratic Party that was in the Republican Party. We see rich, old, white men.

TLR: You’ve talked about some things you’d like to do with executive authority as President that easily fall under constitutional powers inherent in the office… such as pardoning those convicted of victimless crimes and bringing our troops home. However, you’ve also talked about eliminating things like the Department of Education and the Federal Reserve. Given that Congress created and funds such entities, what could any president realistically do to end these?

JJ: Well, first of all, I would do as much as I could do. For instance, I would have a Department of Education chairperson who I would say… “okay, slash as much of the budget as you can”, because a lot of these authorities, a lot of these entities are only as powerful as the money that they have to throw around. So if we can slash the budgets, if we can keep them from being funded, then we would reduce their power.

Ideally, we would eliminate the Department of Education. And by the way, I heard stories that when the Department of Education was first brought about in the 1970s, they were going to call it the Department Of Public Education. And it took a while before they figured out that it spelled the word DOPE… that may be folklore… but ideally, we just get rid of it. But if we take away the money, we take away the power, and that’s really what government’s all about. Government has the money. Therefore, they have the power. We turn our money over to them, and they use that as power against us.

TLR: Should Donald Trump have been impeached and if so, under what charge?

JJ: I did not think he should have been impeached under the charges that were brought against him. I’d like to point out that Alan Dershowitz said this long before he was Trump’s lawyer. Alan Dershowitz is a Democrat. He referred to himself as a proud Hillary supporter. And yes, he used the term proud. And he said that this is a case of… we have a person, now we’ve got to go find a crime. He said, That’s not the way the United States works. The way the United States works is we see a crime, and then we go out and look for who committed it. So he said, if we do it this way, if we start off with somebody who’s unpopular, heck we can… if we look at the laws, what it turns into is that there’s somebody you don’t like you could probably find any kind of law.

When I was running for VP, I talked to somebody who works behind a deli counter And… he said that OSHA had laws in which the floor was not supposed to be wet at any time because somebody could slip and get hurt. The Department of Health had a law that said you had to wash the floor once a day or twice a day or whatever. So there are so many bureaucracies, so many laws out there, that if you picked any one person, you could probably find some law they’re breaking… if for no other reason than that we’ve got so many laws on the books that contradict each other. It’s impossible to be 100% law abiding…

TLR: Yeah, three felonies a day and all that. In 2018, the LP had a couple of sitting members of state legislators who got there under the banner of a major party but then switched in office. When running for reelection as big “L” Libertarians, they lost seats that they probably could have otherwise kept. How far off do you think the Libertarian Party is from being competitive in such races in an actual electoral sense? And how do you get there?

JJ: Well, I think we get there by growing the party and different people have different philosophies on this. I think that in order to get anywhere, we need to have candidates at all levels: state, local and federal. And we need to have, of course, supporters, donors, people knocking on doors and all of that. So in 1996, Harry Brown and I focused on membership, and we doubled the party during those two years, and that’s been the largest growth in Libertarian Party history. And that’s what I think we need to replicate.

I think we need to become so big that people can’t ignore us. I’m not sure that the best way to do it is to look for people who already believe in big government, who’ve been elected for years, and then try to convince them to go our way. A lot of times, they got there by money from the special interests, from lobbyists. There have been a few exceptions. I will point to Ron Paul, I think Ron Paul is a libertarian. But if special interests give you a lot of money to get into office, it’s going to be hard to now say “ah, nevermind. I’m going to do something else”.

TLR: You’ve talked a lot, even here, about your connection to Harry Browne, as his VP in ’96. However, a lot has changed in the last 14 years. Why are you the best choice to head the ticket in 2020? And what have you done since ’96 that makes you more qualified for the top slot than then?

JJ: First of all, there are some things that haven’t changed. Government is still too big and there are still a lot of the same philosophical reasons, some of the same history. For instance, I was at… in Alabama, I got a lot of comments. I won’t name the candidate, but one of the other candidates had a campaign worker who came over to me who said, ‘well, you killed it on the anti-discrimination question. That was great’. Well, it was actually mostly a question… an answer that I’ve crafted for 1996 and things haven’t changed.

One of the things I pointed out is, most Americans don’t realize when Rosa Parks was discriminated on that bus, that was a government run bus she was on. Not private industry. Private industry tends to do better if they treat their customers right. For instance, 70% of the ridership was black. Why would you discriminate against your best customers? Also people, companies who hire, the best employees tend to do better in the marketplace. So things like that haven’t changed.

I was on something like 300 radio shows back then. I’ve had a lot of experience. So I can speak to a lot of these things. So that’s one thing that I think would help me that would carry over from ’96. But you’re right, things are different now. We’ve got social media, which we didn’t have before. And for those types of things, I do have other people. For instance, Caitlin, who set up this interview with you. So we have brought on people to update the technology and the memes.

TLR: You have called for the Libertarian Party to delete the abortion plank, which would presumably mean that the platform was actually silent on the matter and individual candidates could feel more free to run under their own interpretations on the interplay between that and the non-aggression principle.

If there were no abortion plank, would you personally run as a pro-life Libertarian?

JJ: Um, there’s a lot of hypotheticals there.

I am not going to feature abortion, whether pro-choice, pro-life… I am not going to have that as part of something that I’m campaigning on or that I’m emphasizing. Because there’s something like 2% of the population, where that’s their number one voting issue. Something like 80% of Americans thinks that abortion should be okay in the first three months. It just seems like for the most part that’s been set aside for more urgent things. So I would not run on the issue one way or the other. And in fact… right now I just say I support the party platform.

But let me point out, the reason I thought that the plank should be eliminated isn’t to have candidates who are pro- life, but so that people outside the party? So many times I see this as a litmus test. And so many times I run into people who are just so frustrated with Republicans because they’re not following through on smaller government. They’re frustrated with the Democrats, because they’ve changed. They’re no longer for free speech. Now they’ve become, I hate to throw terms around, but let’s just say more authoritarian. So people are looking for another party, and they look towards the Libertarian Party and they say, “Well, I can’t be in the Libertarian Party because I’m pro-life.”

And a lot of Libertarians send that message out that if you don’t agree with us, 100/100, you can’t be in our party. The main reason I wanted to get rid of that plank is so that all of these many fine voters out there who are lost… who don’t have a small government party to go to… will look at us as an option. And my experience is that once people join the party, they become more Libertarian on all issues. In fact, I was just talking with somebody a couple of weeks ago, at the Florida convention. And he said, “You know, when I joined the party, I was 80/100, but being around all the people in here and all the ideas now I’m 100/100.”

So what I would like to do is drop that one barrier that seems to be a big barrier, so that we can increase membership and then get people to look at the other things.

TLR: Why should voters trust you?

JJ: I’ve got the credibility of a teacher. And the nice thing about my profession… and technically my job is senior lecturer, it’s not professor. But when people ask me what I do for a living, I say I teach at Clemson. People do tend to respect and trust teachers, college professors, and so forth. So I hope I have that credibility already.

But I can say that I’ve never publicly broken a promise… such as I’ve never raised taxes. I’ve never told voters one thing and voted another way. Pretty much every stance I’ve been on, I’ve stayed there. And I have been in the Libertarian movement for 40 years now. And I have not changed my opinion on that. It’s not like well… I started out as a Democrat, and then changed my mind became a Republican and then became something else. I’ve always been staunchly pro-liberty. 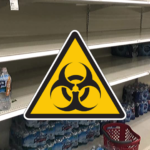