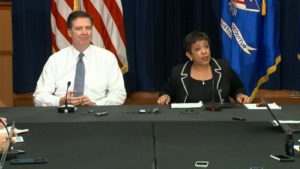 A source, reporting to Fox News, has come out to say that the decision by the Federal Bureau of Investigation (FBI), and the Department of Justices (DOJ), to not indict Democratic Presidential nominee, Hillary Clinton, for her handling of a private email server while serving as the Secretary of State, as well as the mishandling of classified documents which would have been on said server.

“No trial level attorney agreed, no agent working the case agreed, with the decision not to prosecute — it was a top-down decision,” said the source who is described as an official close to the Clinton case.

The source, who spoke to Fox News on the condition of anonymity, said FBI Director James Comey’s dramatic July 5 announcement that he would not recommend to the Attorney General’s office that the former secretary of state be charged left members of the investigative team dismayed and disgusted. More than 100 FBI agents and analysts worked around the clock with six attorneys from the DOJ’s National Security Division, Counter Espionage Section, to investigate the case.

A high-ranking FBI official told Fox News that while it might not have been a unanimous decision, “It was unanimous that we all wanted her [Clinton’s] security clearance yanked.”

“It is safe to say the vast majority felt she should be prosecuted,” the senior FBI official told Fox News. “We were floored while listening to the FBI briefing because Comey laid it all out, and then said ‘but we are doing nothing,’ which made no sense to us.”

Fox News did reach out to the FBI for comment, however they were evidently redirected to previous public statements that FBI Director James Comey had made in the past, where he denied any political motive was involved in the decision.

“I know there were many opinions expressed by people who were not part of the investigation – including people in government – but none of that mattered to us,” Comey said July 5  in announcing the FBI’s decision on the Clinton emails. “Opinions are irrelevant, and they were all uninformed by insight into our investigation, because we did the investigation the right way. Only facts matter, and the FBI found them here in an entirely apolitical and professional way.”

“It is well known that the FBI agents on the ground, the human beings who did the investigative work, had built an extremely strong case against Hillary Clinton and were furious when the case did not move forward,” said Napolitano. “They believe the decision not to prosecute came from The White House.”

Napolitano’s claims are backed up by a New York Post (NYP) piece which also came out this week, in which multiple veteran FBI agents saying, “has permanently damaged the bureau’s reputation for uncompromising investigations with his cowardly whitewash of former Secretary of State Hillary Clinton’s mishandling of classified information using an unauthorized private email server.”

Other comments from the NYP story include,

“The FBI has politicized itself, and its reputation will suffer for a long time. I hold Director Comey responsible,” Dennis V. Hughes, the first chief of the FBI’s computer investigations unit.

Mentioned in the Fox News article also was the idea that Comey may have based his decision that a recommendation to charge would not have been followed by DOJ prosecutors.

“Basically, James Comey hijacked the DOJ’s role by saying ‘no reasonable prosecutor would bring this case,’” the Fox News source said. “The FBI does not decide who to prosecute and when, that is the sole province of a prosecutor — that never happens.”

Napolitano has also mentioned that he believes the FBI was hampered from the start, since there was no grand jury, and no search warrants or subpoenas issued.

“The FBI could not seize anything related to the investigation, only request things. As an example, in order to get the laptop, they had to agree to grant immunity,” Napolitano said.

Beyond the apparent internal struggle happening at the FBI and DOJ, newly released emails via Wikileaks from Clinton campaign chairman John Podesta show that Clinton’s staff may have had access to Justice Department employees during her ongoing investigation, which may have helped her and her staff receive favorable treatment.

According to The Daily Caller, House Judiciary Chairman Bob Goodlatte along with other House Republican members, called for a probe to investigate “the special treatment given to key witnesses during the investigation of former Secretary of State Hillary Clinton’s unauthorized use of a private email server to send and receive classified information.”