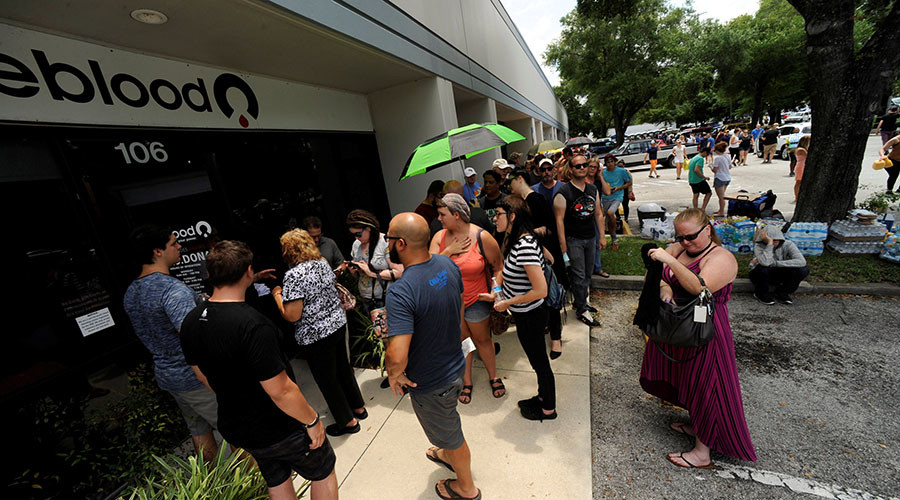 In the wake of the terrible tragedy on Saturday night in Orlando, Florida, there is a lot of opportunity to politicize the events. The left is talking about guns, the right is talking about Islam, and some of us just hold our gay loved ones a bit tighter and try to figure out how best to enable them to live their lives freely and without fear of these sorts of things happening.

Talking about guns, talking about radical Islam — neither of those things can help the 50 people killed and the 53 injured (numbers may rise, this is being written within 24 hours of the shooting). This was the second largest mass shooting in American history, after the Wounded Knee massacre.

What can help the families of the victims and those still fighting for their lives? One thing would be donations of blood. In fact, OneBlood, a blood bank in central Florida, has had donors lining up out the door to give blood — they have asked people to come back over the next several days since they were at capacity on Sunday.

However, in an ironic twist, many people have to be turned away for another reason. In 1983, “men who have sex with men” (ever) were banned from donating blood by the Food & Drug Administration. As testing technology has improved, the FDA finally updated its stance only six months ago — now the recommendation is “defer for 12 months from the most recent contact a man who has had sex with another man during the past 12 months”. Organizations like OneBlood haven’t even updated themselves to the new “looser” FDA standards.

Basically, a sexually active gay man is disallowed from donating blood — he must be celibate for one year in order to donate. This position by the FDA doesn’t take into account condom usage, men who are in long-term monogamous relationships with another man, or gay men who engage exclusively in oral sex (more than 60% of gay men, according to some studies).

Granted, there are risks with HIV — and it can take several weeks for HIV to appear in a test. Blood is tested before it is used, however, there are risks due to these “windows” where infection may not appear in a test. Intravenous drug users, people who have had sex with prostitutes, and people who’ve received tattoos within the past year, are all not supposed to donate, as well. The FDA’s recommendations apply to the various blood donation establishments (some of which enact more stringent policies).

All of this, however, relies on self-reporting. A heterosexual individual engaging in at-risk behaviors (such as numerous sexual partners without using condoms) is not, by policy, “recommended” not to donate, and the criteria of “men who have sex with men” is thoroughly vague, with no respect to exactly what that means and how risky their behavior may or may not be.

The FDA may want to reconsider these standards, as many who wanted to donate were turned away due to presumptions about their lifestyle and risk. In the meantime, thank goodness the blood banks have so many people lining up to donate to the victims that they have to tell them to come back tomorrow. This is a good problem to have. I wish we had this problem more often.

We may have a problem with guns, or radical Islam — I’m sure politicians and talking heads on both sides of the aisle will try to scare me from both of those things in the coming weeks; but I’m going to remain encouraged by lines around the block of blood donors, and the outpouring of love and support during PRIDE weekend. There’s good in this world, and I’m overwhelmed to see it.

Not A Joke: ‘Hamilton’ Cast Drops Muskets Because Of Orlando

One Year Since the Pulse Shooting, and the Gay-Left Has Learned Nothing