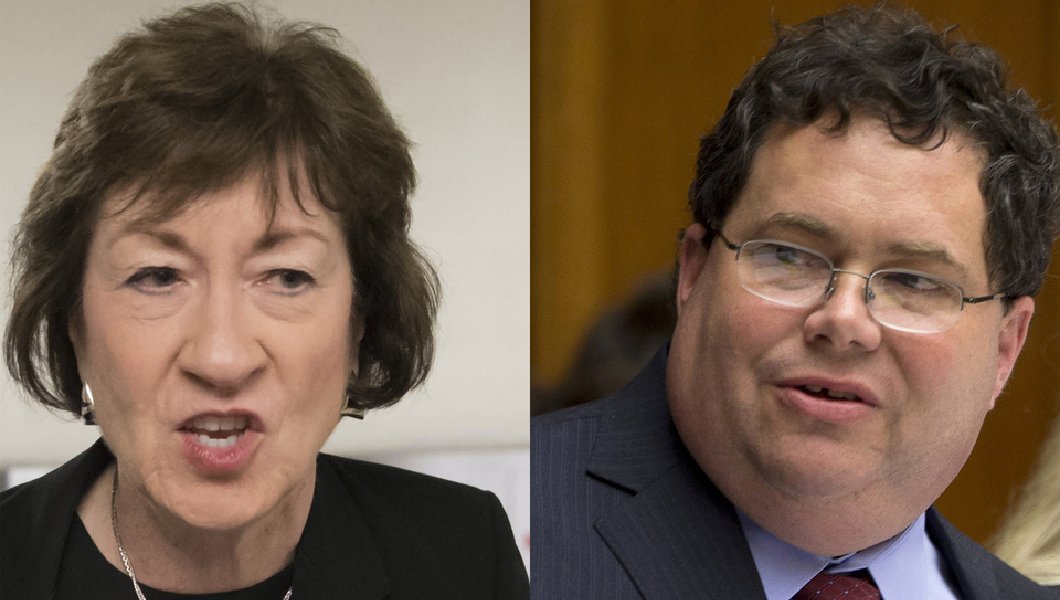 Two senators were caught trash talking a Texas Republican representative while the microphones were recording after an appropriations markup Tuesday.

Democratic Rhode Island Sen. Jack Reed and Maine Republican Susan Collins each took swipes at Texas Republican Rep. Blake Farenthold after he said Monday that if Collins were a man they would settle their differences on the Obamacare repeal bill with a duel.

“Did you see the one who challenged me to a duel?” Collins said to Reed, apparently referencing Farenthold.

“I know,” Reed said in the recorded audio. “You know why he challenged you to a duel? ‘Cause you could beat the shit out of him.”

“Well, he’s huge. And he — I don’t mean to be unkind, but he’s so unattractive, it’s unbelievable,” Collins responded. “Did you see the picture of him in his pajamas next to this bunny?” Farenthold was photographed at a 2010 campaign event wearing in pajamas with yellow ducks printed on them, standing next to a lingerie model.

MALE SENATOR on FARENTHOLD: "You could beat the shit out of him."

The exchange between Reed and Collins, first pointed out by The Hill’s reporter Niv Elis, happened during a markup of the Transportation, Housing and Urban Development, and Related Agencies Appropriations Act of 2018.

Farenthold blamed Collins and “some female senators from the Northeast” for derailing the repeal of Obamacare in the Senate.

“If it was a guy from south Texas, I might ask him to step outside and settle this Aaron Burr-style,” Farenthold told the Associated Press Monday.

Farenthold apologized for his comments in a handwritten note Tuesday, Collins told The Daily Caller News Foundation in a statement.

“I received a handwritten apology from Rep. Farenthold late this morning,” Collins said. “I accept his apology, and I offer him mine.”

“Neither weapons nor inappropriate words are the right way to resolve legislative disputes,” Collins said.

About 36 minutes into the audio-only recording Tuesday, Collins and Reed discussed how the House of Representatives was handling the budget deal, and how Republicans have said very little about the impending debt ceiling.

“I swear, the OMB [Office of Management and Budget] just went through and whenever there was ‘grant,’ the just X it out,” Collins said of OMB director Mick Mulvaney’s approach to the president’s budget.

“Yes. I think — I think he’s crazy,” Reed said, apparently referring to Trump. “I mean, I don’t say that lightly and as a kind of a goofy guy.”

Editor’s Note: This post has been updated with Sen. Collins’s statement.

Workers Using Marijuana May Be Protected From Employer Drug Testing

Report: MacArthur Could Be Soon Be Driven Out Of Tuesday Group