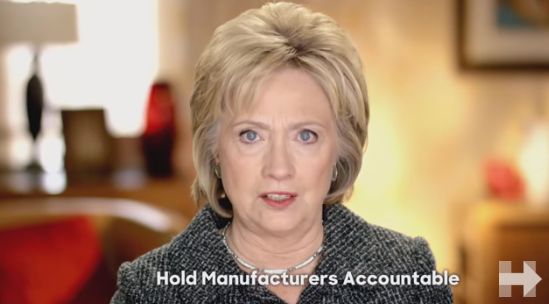 Hillary Clinton’s new ad touts reckless and baseless liability laws that would shut down gun manufacturers all together in the United States.

Liberals like Hillary Clinton are not stupid when it comes to their plans to disarm the American public. They know direct action will never work as the public will never willing relinquish its firearms. Not they are trying covert methods; subjective mental health definitions and the continued insistence that gun manufacturers be held legally liable for any crimes committed with their products.

Such liability would undoubtedly put all gun manufacturers out of business in the United States.

In her new ad, Clinton champions what Barack Obama has made mention of many times; a liability policy that would put gun manufacturers in the cross hairs.

Even socialist candidate Bernie Sanders see this as too heavy handed and unreasonable.

“The issues that you’re talking about is, if somebody has a gun and it falls into the hands of a murderer, and that murderer kills somebody with the gun, do you hold the gun manufacturer responsible?” Sanders said on CNN in July. “Not any more than you would hold a hammer company responsible if somebody beat somebody over the head with a hammer.”

But Hillary’s ad strikes in unison with the calls from party leaders and the president himself.

Make no mistake about it, this will kill the gun industry, just as hold car manufacturers liable for all car accidents would kill the automotive industry.

Jackpot! Here’s How Much Government Takes From $1.4 Billion in Powerball Winnings