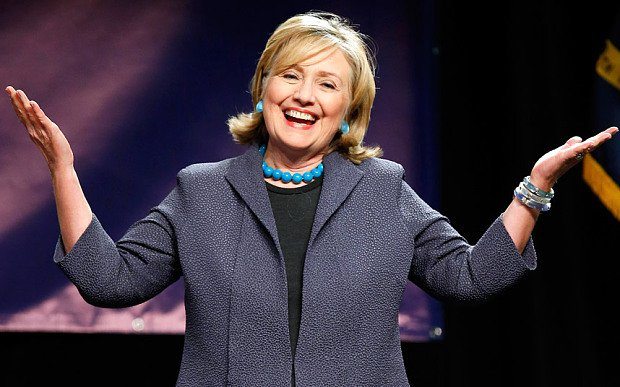 “And I would’ve gotten away with it too, if it wasn’t for you meddling kids!”

Hillary Clinton emerged from political hibernation Tuesday by declaring herself “part of the resistance” to Donald Trump’s presidency — and spreading blame for why it is not her sitting in the Oval Office.

In her rare appearance, Clinton made sure she laid blame as to why she wasn’t crown… I mean elected to the presidency.

“If the election had been on October 27, I would be your president,” Clinton told moderator Christiane Amanpour, the CNN anchor, at a Women for Women International event in New York.

At first, the former Secretary of State pretended to own her loss saying, ““I take absolute personal responsibility. I was the candidate. I was the person who was on the ballot.” But in the same moment she would then refuse to admit that the errors which ruined her campaign were indeed her fault.

The Washington Post (WaPo) explained the Democratic nominee declined to fault her strategy or message, nor did she acknowledge her own weak­nesses as a campaigner or the struggles by her and her advisers to at first comprehend and then respond to the angry mood of broad swaths of the electorate.

In fact, Clinton really blamed two things for her loss

“I was on the way to winning until the combination of Jim Comey’s letter on October 28 and Russian WikiLeaks raised doubts in the minds of people who were inclined to vote for me but got scared off — and the evidence for that intervening event is, I think, compelling [and] persuasive,” Clinton said.

Clinton talked about “the unprecedented interference, including from a foreign power whose leader is not a member of my fan club” — referring to Russian President Vladi­mir Putin, with whom she tangled as secretary of state, explained WaPo.

President Trump reacted to Clinton’s claim that Comey’s statements had a role in her defeat, writing that the FBI director “was the best thing that ever happened to Hillary Clinton in that he gave her a free pass for many bad deeds!”

FBI Director Comey was the best thing that ever happened to Hillary Clinton in that he gave her a free pass for many bad deeds! The phony…

“The phony … Trump/Russia story was an excuse used by the Democrats as justification for losing the election,” the president wrote, before posing a rhetorical question: “Perhaps Trump just ran a great campaign?”

…Trump/Russia story was an excuse used by the Democrats as justification for losing the election. Perhaps Trump just ran a great campaign?

Amanpour then moved to asking Clinton if she also believe that misogyny played a roll in her defeat.

Clinton replied, accepting another red herring, “Yes, I do think it played a role.” She added that sexism “is very much a part of the landscape politically and socially and economically.”

Robert Shrum, a Democratic strategist who advised two losing presidential nominees, Al Gore and John F. Kerry, even claimed that Clinton was not truly analyzing the reasons she failed, he said:

Christie Slams Marijuana Legalization As The Work Of ‘Crazy Liberals’