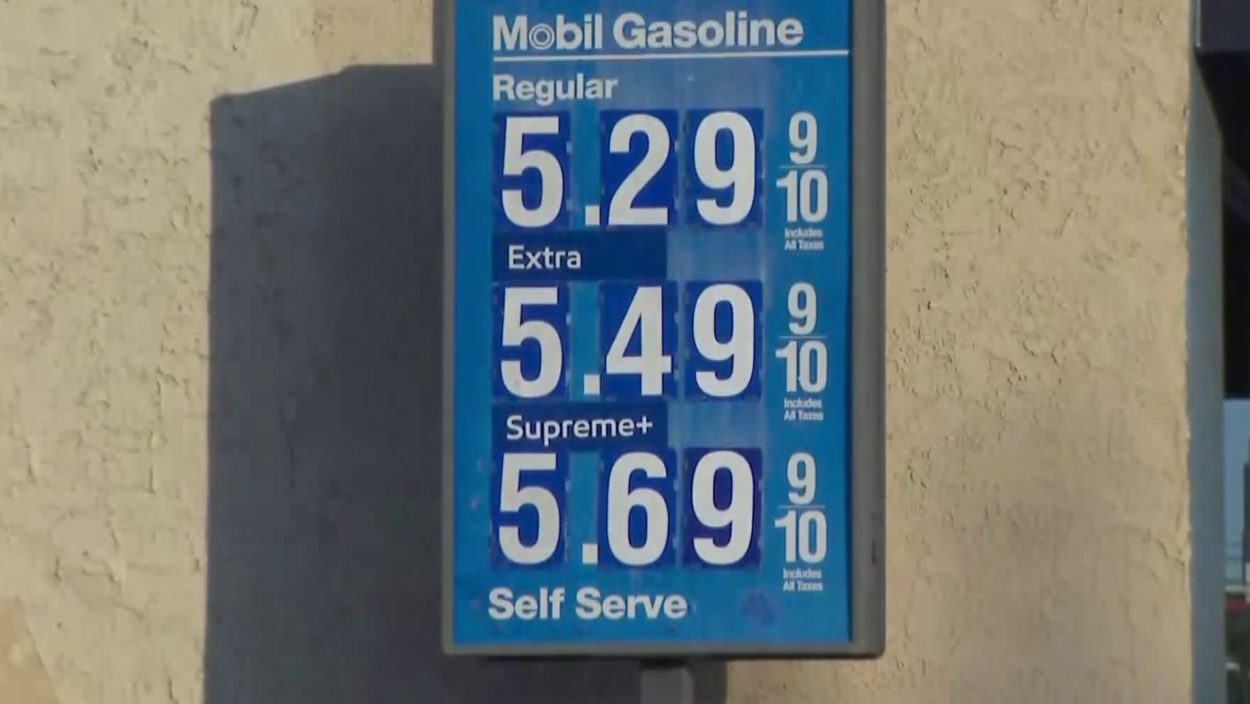 EDITOR’S NOTE: This article was originally published on May 19, 2018. It has been updated to include Newsom’s call for an investigation into oil companies, California’s recent gas price increases and news of the state’s wildfires.

The price of a gallon of gas costs more in California than in the rest of the country for a variety of reasons, but government regulations, rising house costs and steep taxes are playing a significant role.

California Gov. Gavin Newsom asked his attorney general Monday to investigate oil companies for conspiring to keep gas prices artificially high. Yet years of tax increases, pricey fees and a lack of infrastructure in California are more to blame than a vast conspiracy concocted by big oil. The Democratic governor is facing heat as prices go up and Californians lose power.

Former Democratic Gov. Gray Davis of California has experience with such recriminations. He was recalled in 2003 for mishandling the state’s budget, increasing California’s car registration fees, high gas prices and rolling blackouts. It was only the second such recall election in U.S. history. Actor Arnold Schwarzenegger won the special election in November of that same year.

A similar situation is unfolding in 2019. The price of a gallon of gas in California is slowly increasing. The average cost in the state has skyrocketed to $4.18 while drivers in other areas are paying as much as $5 per gallon, CNN Business reported on Oct. 8. California’s gas taxes are already some of the highest in the country, so the price increases are adding insult to injury.

Newsom’s predecessor, former Gov. Jerry Brown of California, signed a law in 2017 imposing a 12 cents a gallon increase on citizens and raising the tax on diesel fuel by 20 cents a gallon. It also implements an additional charge to annual vehicle license fees ranging from $25 to $175 depending on the car’s value.

Brown sold the bill as a way to fix the state’s roads, but reports show the bulk of the money has not gone to street upkeep. California’s Transportation Agency announced in April 2018 grants to recipients for some $2.6 billion of the transit funding raised through the law. Critics railed against Brown’s measure.

Opponents of the law managed to place a voter referendum on the 2018 November ballot to repeal the gas tax. It would have reportedly lowered the price of gasoline in the state to $2 a gallon by 2021, Politico reported in 2018. The initiative failed, the tax stayed in place, and Brown managed to weather the storm without much blowback. It remains to be seen if Newsom can do the same.

Newsom will have to do so while contending with California’s public utility Pacific Gas & Electric’s decision on Oct. 9 to begin a days-long power shutoff to curb the risk of wildfires in the northern part of the state. PG&E is trying desperately to avoid the kinds of massive wildfires that scorched several acres of Northern California in 2018.

Newsom’s critics are piling on as well.

“Newsom is using this phony investigation to draw attention away from his own fraud on gas prices – namely the raids he ordered on our gas revenues that shift money from road repairs to his pet projects, and Californians must hold him accountable,” Carl DeMaio, a congressional candidate who campaigned against the gas tax, said in a statement Tuesday.

DeMaio was referring to reports suggesting the Democratic governor is shifting gas tax revenue from road repairs to rail projects. Newsom has not responded to the Daily Caller News Foundation’s repeated requests for comment. A response will be added should one be received.

Here are some of the factors that affect California’s pump prices.

The gas tax Brown signed is figured as a percentage of the whole price. Thus, when there’s an increase in the underlying price of fuel, the sales tax also increases. The State Board of Equalization, which is responsible for administering California’s tax policies, sometimes annually adjusts the state’s two excise taxes to help offset changes in the sales tax.

Analysts believe taxes and fees are uniquely responsible for the sky-high prices.

“State and federal laws like the recently approved gas tax, the Low Carbon Fuel Standard and other fuel-related taxes and fees add a little over 92 cents to each gallon of gas and have a profound impact on California’s businesses and communities,” Kara Siepmann, a spokeswoman for the Western States Petroleum Association (WSPA), told the DCNF in 2018.

Anti-trust laws prevent the WSPA from commenting directly on specific policies and their potential effects on gas and oil prices. But Siepmann cited state and federal data showing fees and taxes make for nearly $1 per gallon, while the average U.S. gas tax amounts to just over 52 cent per gallon (cpg).

California currently ranks seventh highest in the country when it comes to total taxes and fees, according to figures the American Petroleum Institute calculated. The recent increase makes California the second-highest gas tax in the country behind Pennsylvania. The Golden State’s gas tax would increase from 40 to 52 cpg.

California’s strict environmental rules mandate gasoline sold within the state be produced according to strict formulas designed to reduce pollution. Unfortunately for citizens, the exotic formula makes a gallon of gas more expensive and difficult to produce. Few refineries outside the state are equipped to produce it.

Worse yet, the gasoline formula changes multiple times a year, switching from a winter recipe to a summer blend designed to slow down evaporation. The summer blend is even more expensive and trickier to make, thereby elevating the risk of refinery mishaps. Refiners also use up inventories of either blend before the switch, increasing the risk of price volatility.

No Interstate Pipelines And Few Refineries

Interstate pipelines could funnel gasoline quickly and cheaply to California, but no such pipelines exist connecting West Coast refineries to the Golden State. The state must therefore get the bulk of its fuel from ship or truck.

Only when pump prices are soaring inside California is it worth it to pay those transportation costs for refiners capable of producing California’s gasoline formula. The state’s refineries also tend to keep inventories tighter than the national average, federal energy statistics show.

As a result, prices surge quickly when a disruption occurs from events such as machinery breakdowns, power outages or labor problems. Imports of gas into California increased to more than 10 times their typical level after an explosion in 2015 took an ExxonMobil refinery in the state offline. State officials accepted thousands of barrels of refined oil from Russia and India at the time.

California officials have increasingly rezoned land leading to more housing developments and fewer service stations. Exploding housing prices prompted the decision to rezone, if for no other reason than to relieve the problem and lower rent prices.

There are also 40% fewer gas stations in the city than there were just a decade earlier. Fewer stations mean less access for drivers and a lack of competition among retailers — more than 90% of California’s 10,000 gas stations are affiliated with major corporations, according to a 2015 report from the Los Angeles Times.

San Francisco, Oakland and San Mateo in California opened a lawsuit asserting five oil companies, including Exxon and Chevron, should pay huge sums of money for contributing to man-made global warming. Oakland has also sought to prevent energy companies in Wyoming and Montana’s Powder River Basin from transporting their coal from the city’s ports to international markets.

California faces a tough situation if the lawsuits miss their mark. Nearly 40% of the state’s crude oil is produced inside the Golden State, even though California lacks refineries. Exxon, Chevron and others being sued will almost certainly pull out of California if the litigation is successful. The oil industry also contributes $66 billion of gross income for 2.7% of the state’s gross domestic product.

State lawmakers are also teeing off against traditional automakers. Democratic state Assemblymember Phil Ting, for instance, introduced a bill in 2018 that would, if passed, ban the sale of gas-powered cars produced after 2040. He said California drivers must adopt electric vehicles if the state is going to reduce greenhouse gas emissions. Ting wants a full shift to electric vehicles.

Californians haven’t gotten the memo. Electric vehicle sales in California amount to less than 5% of the state’s overall car sales, despite the Golden State’s title as a champion for the electric vehicle market. Analysts, meanwhile, said the market for these types of vehicles is not anywhere near large enough to overcome gas-powered vehicles. The state’s belligerent attitude toward fossil fuels places a lot of downward pressure on California’s already taxed energy market.

The Democratic Party owns supermajorities in both chambers of the California State Legislature. Democrats have maintained a death grip on the state since 1998, when an overwhelming number of Californians voted for Davis, a Democrat who was later recalled over rising gas prices, among other issues.

Six of eight Democratic candidates for statewide offices won in 1998, which allowed the party to increase its majority in the state Assembly from 43 to 48 and in the state Senate from 23 to 25. The party made further inroads across the state during the 2012 elections, winning races in traditionally Republican areas.

San Diego, once a Republican stronghold, elected a Democratic mayor for the first time since 1988. California Democrats padded to their electoral success during the 2018 midterm elections, which was fueled in part by the state’s opposition to President Donald Trump’s policies.

The lack of political parity in California makes injecting different ideas into the state nearly impossible, Dave Hackett, an expert on fuel and transportation issues in California, told the DCNF in 2018. He is the president of Stillwater Associates, a consulting firm focused on helping energy companies.

“Why aren’t normal market forces driving down the prices?” Hackett rhetorically asked before answering. “It began when one party got control of the legislature. They took all of it in the one direction the one party wanted to go in without the other party off-setting.”

Forced Equality Has a History of Genocidal Results

‘So Mommy Told You You’re A Girl?’ Video Shows James Younger Saying His Mother Said He Is A Girl