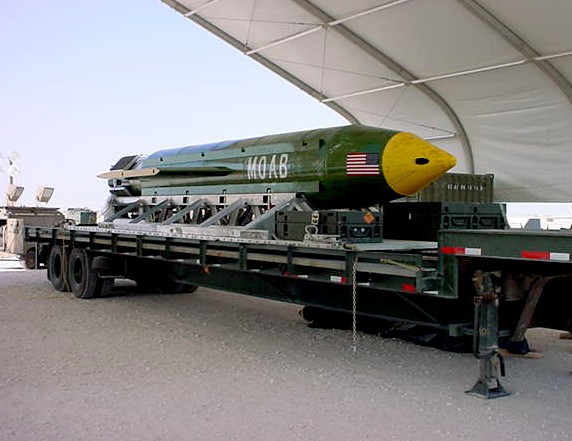 The bomb U.S. forced dropped Thursday on an ISIS training camp in Afghanistan cost U.S. taxpayers an estimated $170,000 per unit in 2003, but the Pentagon does not have an exact cost, according to an Air Force statement.

Multiple news outlets reported Thursday that each Massive Ordnance Air Blast (MOAB), or Mother of All Bombs, bomb cost $16 million, with a total program cost of $314 million. Those figures were likely gleaned from a misreading of an Los Angeles Times article about a different bomb, and a questionable military asset website, TheDCNF reported Thursday. (RELATED: The Story You’ve Been Hearing About The Mother Of All Bombs Is Totally Wrong)

Social media buzzed for hours Thursday repeating that the MOAB cost $314 million or $16 million a piece.

The Air Force’s cost estimate for the MOAB — the largest non-nuclear bomb ever detonated in combat — includes parts, labor, and contracted components, according to “an estimate put together at the time” MOAB was produced, Air Force spokeswoman Ann Stefanek told The Daily Caller News Foundation. The first MOAB bomb was made leading up to the Iraq war in 2003, and $170,000 spent that year would be closer to $227,000 today, adjusting for inflation.

The Air Force could not give an exact price for MOAB because the bomb did not go through the standard acquisition process while being developed, Stefanek told TheDCNF. The research lab used parts already procured, and manufactured the final MOAB in-house.

“We don’t have a replacement cost [for MOAB] or estimated procurement cost because we haven’t put together a contractor requirement,” Stefanek said.

That means that unless the U.S. decides to build more MOABs, its unlikely the Department of Defense will calculate the exact cost of the weapon. As one of the most powerful non-nuclear weapons in existence, the MOAB was valuable more as a deterrent.

“The goal is to have the pressure be so great that Saddam Hussein cooperates,” then-Defense Secretary Donald Rumsfeld said in a March 2003 interview after the first MOAB test.

“Short of that … the goal is to have the capabilities of the coalition so clear and so obvious that there is an enormous disincentive for the Iraqi military to fight against the coalition,” Rumsfeld said. (RELATED: Afghans ‘Thought The End Of The World Had Come’ After MOAB Strike)

The MOAB replaced the Vietnam-era bomb known as the “Daisy Cutter,” but is far more powerful and boasts greater navigation capabilities than its predecessor.

Like the Daisy Cutter, the MOAB delivers a pressurized blast a few feet off the ground that crushes everything in a wide radius.

“What it does is basically suck out all of the oxygen and lights the air on fire,” Bill Roggio, senior fellow at the Foundation for Defense of Democracies, told Air Force Times. “It’s a way to get into areas where conventional bombs can’t reach.”

The Air Force did award at least one contract in the development of the bomb to Dynetics, a defense contractor headquartered in Huntsville, Ala., to design of the bomb’s GPS guidance system for the relatively low sum of $35,000.

The Air Force ordered design concepts for “a 21,000-pound weapon system called the Massive Ordnance Air Blast” in April 2002, according to a 2014 report Dynetics delivered to the Senate Committee on Appropriations.

Dynetics partnered with the Air Force laboratory to build three prototypes of the MOAB, one of which was tested on March 11, 2003. Anyone within 20 miles of Eglin Air Force Base in Florida that day would have been able to see a giant mushroom cloud on the horizon at 1 p.m. The Air Force conducted a second test later that year.

After the test, the Pentagon ordered the bombs, and Dynetics helped produce “more than 10 weapons and delivered them between April and May,” rapidly turning around the weapon just nine weeks after the first successful test.

The process happened so fast that technicians painted the MOAB John Deere green because that was “the only color available in the amount we needed,” said Robert Hammack, AFRL Munitions Directorate Munitions Fabrication Facility.