A horrific attack on a school in Sweden has received scant coverage from the American liberal media. Those who are reporting it are emphasizing that the killer was not armed with a gun, instead he used a sword and knives, and that the low body count is proof of gun control’s effectiveness. However, a closer look reveals that this incident can be traced to the failures of a socialist welfare state and increased gun control.

The killer, who has been identified 21 year old Anton Lundin Petterson, stabbed two people to death and injured two more before being shot and killed by police. The procedure the killer reportedly used was knocking on classroom doors and then stabbing whoever opened it. While it may seem the victims were chosen at random, a racist motive is likely. This school is situated in an area where immigrants make up the majority of the population.


If a masked man enters a school with guns, it would most likely result in the teachers and students fleeing and reacting as soon as possible and try to get away from the person. But if you are told how bad guns are, while everything else is deliberately concealed, what happens then if the murderer arrives with different weapons, such as knives and a sword?

The answer was perhaps given yesterday when a young man entered a primary/junior highschool in Trollhattan, Sweden. Wearing a mask, helmet, and carrying a large knife and sword he was approached by the students. They didn’t flee, instead the asked to take pictures with them, some even asked if they could touch his sword.

“He was playing strange music and did not speak a word. It was eerie music, the kind you associate with Halloween,” one child told reporters.

Some of the children posed for this eerie photo. 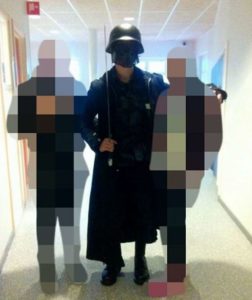 “You are frightening the children, you should leave,” a teacher told the killer, according to the girl who took the picture.

“He just nodded, and then struck into the teacher’s right side with one of his knives. The last thing I heard him say was ‘call an ambulance’,” the girl reports.

She and her friends ran terrified through the school.

“I looked behind me and saw him following us. I was terrified.”

They ran through the second floor of the school and down the stairs. There she fell.

“My vision became blury. A friend dragged me on my feet. At that time the killer was just a few feet away from us.”

When they ran towards the entrance she saw three people laying on the floor. Once the left the school the killer stopped but she and her friends continued running away from the school.

“Then we met another teacher. I told him ‘don’t go to the school, there is a killer loose’. He then followed us home.”

The whole family is shocked by the incident. Four of their six children all attend Kronan School.

“The teacher that got stabbed is my mentor and math teacher. He is a kind man and has tought me alot. I really hope he is okay,” she said.

So called school massacres has become a large part of the news lately. Much because of the horrible episode at Umpqua college Roseburg.

To nobodys surprise, activists, politicians, and, last but not least, President Obama have once again publicly supported the idea of restrictions when it comes to gun laws, even though these attacks has happen in a so called “gun free zones”.

In Scandinavia there is much talk about the “American condition”.  An often used expression among socialist politicians and their supporters, based on prejudices which create the idea that the US has a general problem with trigger happy citizens, terrible (or non existing) health-care, and religious nut jobs mixed with things taken from an old Western movie. Of course, rather than look at the possible illness behind the symptoms, they prefer to focus only on the latter. The general knowledge and understanding among the Scandinavian population when it comes to American life and government is beyond par. And the journalists don’t seem to think telling a different story is worth the ink.

Every time a tragedy like this happens we are bombarded with statistics showing the number of gun related homicides and how they are higher in the US. However, it is never compared to the total number of homicides including knives and other weapons. In Scandinavia, it is not popular to consider that incidents like this may be tied to an increasing sense of disillusionment with the failings of the welfare state.

Note that European countries which have all but banned criticism of the modern welfare states they have become and allow open immigration have the highest rate of national socialist parties. These nationalist groups are becoming increasing angry and disillusioned, believing they will not be receiving the benefits they have paid for with the tax dollars. Immigrants, seen as outsiders, are being increasingly scapegoated for the inevitable failures of government steered economies and cuts to social welfare programs.

France, Sweden, and the Netherlands, can all be noted for these circumstances which have contributed to rise in ultra-nationalist sentiments.

While we cannot know the motivations of Sweden’s sword wielding school killer, we do know he targeted a school in a predominantly immigrant area. We also know that as immigration swells and governments run short on resources, nationalism will rise. That will lead to increased tension and manifest in more violence. But liberals will be more concerned with the killers’ weapons of choice than the conditions that promise violence.

French Man Faces Jail After Renting Out His Wife To 2,742 Men