The following is a transcript of a radio monologue delivered by Joey Clark in March of 2015.

The State, or government, but the State, the big nation-state, really is the organization of the herd to commit violence against another herd. And in these moments when war breaks out, those who realize war is hell also realize it destroys our liberty even when there’s a just cause.

Over the weekend, I was doing a little reading up on the classics, on the Greeks. And where do the classics begin? Well, you start with Homer, the Iliad and the Odyssey, talking about the great Trojan War and all the feats that went on within the context of that war.

And much in the same way that Homer’s account of that war defined the art and poetry and all those other things of Greek society, World War II, and really both the world wars–we could think of it as a multi-decade European Civil War–but WWII has really defined our era. 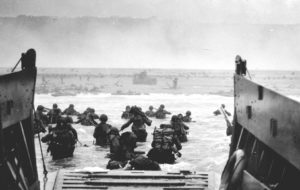 I tend to think of war as mass murder in the name of high ideals. It makes me sad to see so many people eager for it. The highest aspiration of the American people should be peace. But at times, war does come despite my hopes and my worry that it’s insanity.

And it’s what you do in that context. When the storm comes, you shouldn’t just give up. And sometimes you have to act boldly on your own as an individual and do the good thing as a hero–not in vanquishing the other, not in conquest, but in doing good for its own sake.

It’s especially hard to do good for its own sake in the context of war when somebody is saying you’re either on team A or team B. There is no independence from this!

It had to be several months ago, if not a year ago, where on talk radio I listened to my good friend, Greg Budell, meet one of his heroes: the candy bomber, Gail Halvorsen.

I remember him sitting in this studio. Sitting where I work every day. A man of the so-called greatest generation man. A man who was in the thick and thin of that war that has defined our modern era so much.

And he told the story of one day he had landed and off-loaded the supplies, he saw a bunch of children on the other side of the fence. Children who had seen horrors in their young ages. Had to have seen horrors. Had to too early realize how tough this world can be. 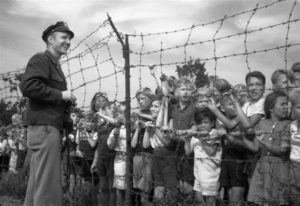 At first he thought, “I should give them a stick a gum. That’s all I have on me. No, they’ll fight over it. I’ll walk away.”

He walked over to the fence. He said there was this little blonde girl with the brightest blue eyes.

Such a little beauty. Innocence. In the violence of that “post-war” era where men with immense ability to create violence and turmoil reigned supreme.

That struck Mr. Halvorsen to his core. He had to do something more.

So he went back–and I believe against orders–he ripped up his bed sheets and made little parachutes. He filled up the little parachutes with candy, chocolate and whatnot. And he would drop it behind the fence to these kids. 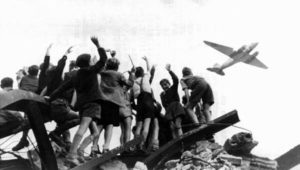 I’m sitting in the radio studio, hearing this story, and it seems so far away. I’m not born until 1988. This is a foreign time to me. And being the call-screener, I get a call. It’s the voice of a man on the other end of the line.

He says, “Hi, my name’s Pete McCoy, but I grew up Dieter Hesse, and I remember seeing those parachutes fall on me. I was a little German boy, and the actions of that man, Mr. Halvorsen, gave me so much hope.”

Even in times of great evil, surrounded by mass murder, by men who lust for power and domination of other people, we can still do beautiful things.

We can still do good things for their own sake.

A hero is not always somebody who just vanquishes the enemy. Dare I say, I think the real heroes are those like Mr. Halvorsen, who against the rules listened to the little voice in his head and did the beautiful thing. Did the right thing.

That resonates for the ages.

I tend to think trip wires are being set all over this world. That a storm will come. I hope it doesn’t, but if it does, don’t forget the good inside you. Don’t become bitter. You don’t always have to fight an enemy. Sometimes, you can just reach out your hand…like handing a stick of gum to a little girl.

Video: Ben Carson Thanks Hillary For Her Gift In Awesome Way

What We Really Need In the New House Speaker