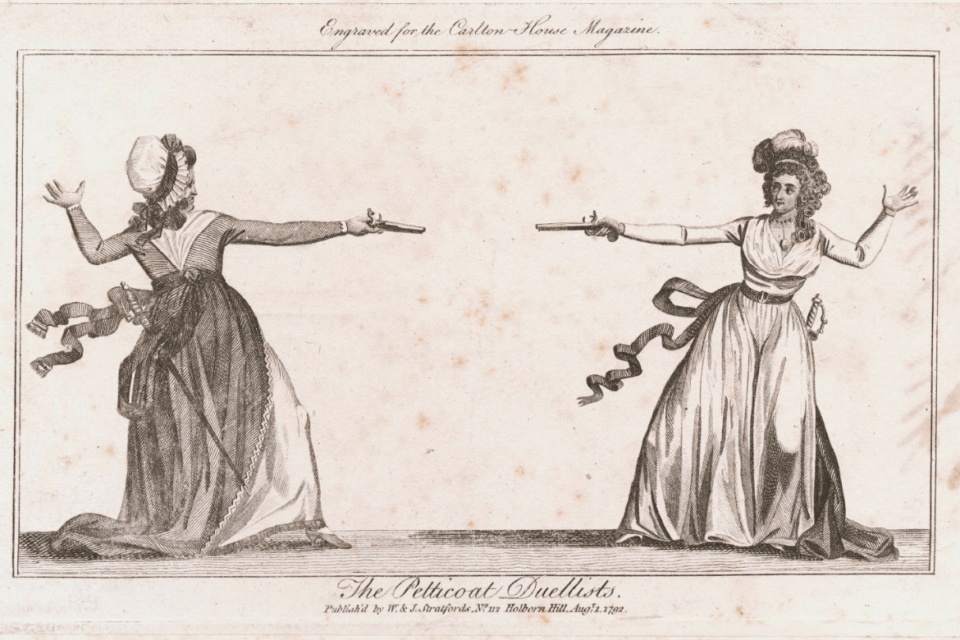 What does honor mean to you? According to the Merriam-Webster dictionary, it is “a good name or public esteem; or, a showing of usually merited respect.”

Cultures throughout the world put a heavy emphasis on honor. You may consider a soldier in the military earning a medal in combat through blood, sweat and tears to be honorable. Or receiving an award for exceptional accomplishments at work. What would be considered dishonorable? Military desertion is considered to be a horrible offense, but dishonor could be as simple as telling a lie. Repercussions can be as extreme as the ‘honor killings‘ of females by male family members that occur in Southeast Asia if a woman does not preserve her “sexual purity” for her husband.

But what if there was a way for people to preserve their honor in a legal way, with two consenting adults being able to fight each other—whether to let out their anger or settle it with the finality of death? First, it will be necessary to examine the historical impacts of dueling in the United States. We must then examine variations thereof that exist today before a conclusion can be reached as to whether such a legal proposal  could survive in America—or if it will be stuck in the past.

How does dueling work? The typical duel protocol was relatively simple. The offended party would send a ‘second’, whose primary duty was to reconcile the conflict without violence. If the recipient did not apologize for the offense, he would have been able to choose the weapon—swords or pistols. Then, the duel would commence and it could end at any point if honor was satisfied.

Dueling culture has existed for centuries in the Western world since the Middle Ages, with knights fighting each other with swords. The Code Duello, written in 1777, established the European rules for dueling, while in the United States in 1838, South Carolina Governor John Lyde Wilson adapted the rules for America. Benjamin Franklin and George Washington both condemned dueling. Washington was losing many officers during the Revolutionary War and congratulated those who chose not to participate in the practice.

The most famous duel in American history occurred between Alexander Hamilton and Aaron Burr. After a series of insults directed at Burr by Hamilton, a duel was arranged. Hamilton, of course, ended up getting shot to death, even though, according to some historians, he did not intend to fire at his opponent. Burr received harsh criticism from the public and his career later fell apart as an indirect result. Dueling in America eventually came to an end, not by the government’s wrath, but public opinion. The old tradition was viewed as being barbaric and equivalent to murder, so it has disappeared completely in the United States.

So how would dueling translate to today? You could argue that we have boxing and MMA fights that fulfill that role, with the safety of gloves, as well as the whistle of the referee at the ready. But, in a sports match, typically the two athletes do not hate each other. Rivalries may exist, but not at the expense of honor.

What might legalizing dueling look like from a legal perspective? A contract would need to be signed by consenting adults of sound mind. Yet, that may not be enough. In a gruesome case in Germany, a man named Armin Meiwes went to prison on charges of manslaughter for killing his friend who had consented to be eaten in a prerecorded video, and the country did not have a law against cannibalism. Contracts would likely need to be arranged by lawyers so that there is no possibility of criminal or civil charges for wrongful death.

The duel would have to take place on private land, as there could be disputes over jurisdiction if the police became involved and the duel was not properly sanctioned. Witnesses and seconds would be absolutely necessary for legal verification, recording each fight. The choice of weapons could be firearms as used historically in America, or fists to minimize injuries. An apology, if one were to be given, would have to be in writing for verification purposes. Gun accidents and injuries would likely increase as a result of the practice, adding the expense of having ambulances on standby for every duel. Clearly, any official way to sanction a duel would be insanely difficult, and both parties could probably resolve the conflict peacefully by the time the process was over.

Any legislation introduced to legalize dueling would likely never make it to the floor of either legislative body. Additionally, in modern times, the general public would probably not support such a practice. Although it may have been viewed as acceptable due to codes of chivalry, times have changed. If post-Civil War dueling was viewed as barbaric then, it would now be viewed as even more cruel. Democrats would use it as an excuse to once again to attack the 2nd Amendment, while some Republicans would be drawing up lists of whom they would want to duel the most.

Ultimately, due to changes in American culture, there would be a near impossible chance of such a bill becoming law, given the complicated logistics of having a duel “legalized”. Even then, it would probably only be among the few rich and spiteful, who would spend millions of dollars to have a chance to shoot someone they do not like (and then only if the other party agreed). For the rest of the population, life would not change drastically, as no one would want to go through the legal conundrum, where there would still be a significant risk that it could end in murder charges.

At the end of the day, although dueling has a negligible chance of coming back, freedom lovers and thrill seekers like myself can still dream of a day when we can say (with all the proper contracts in place), “Give me honor, or give me death!”

Mikhail Timonin is a student at the University of Maryland studying Government and Politics. He believes that people are able to make their own decisions,without government intervention, and as a result, each and
every one of us are able to shape our own destiny