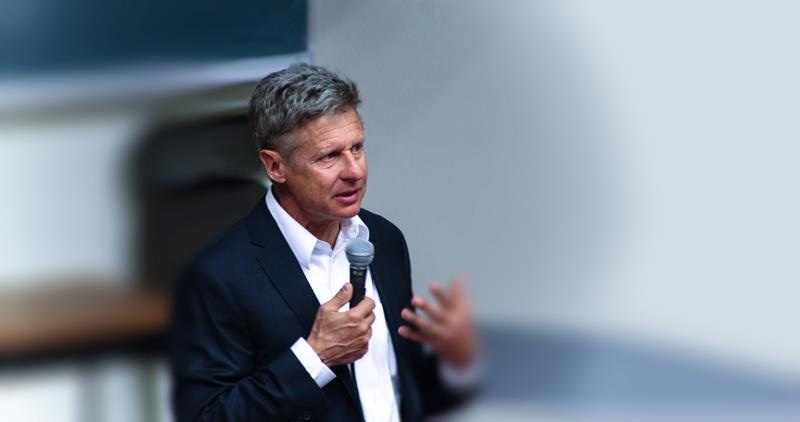 Donald Trump and Hillary Clinton may have won most of the states on Super Tuesday, but Gary Johnson is confident he was a winner as well.

“I actually believe I may have won Super Tuesday,” he said in an interview with The Washington Times.

The Libertarian Party presidential front-runner is the favorite to win the nomination, having ‘won’ the Minnesota L/P caucuses with 75.3% of first-choice votes. His closest competitors, John McAfee and Austin Petersen, came in second and third, respectively.

Johnson went on to say,

With the Donald Trump and Hillary Clinton trains becoming more and more unstoppable in their respective parties, I believe a real majority of American voters are going to be left without a political home in November. To those millions of voters, a successful two-term Governor with a solid record of fiscal responsibility and defense of civil and personal liberties could well be the mainstream option.

Johnson also pointed out that the Libertarian nominee will be on every state ballot this year. He’s also suing the Presidential Debate Commission in order to allow the Libertarian Party nominee on the main debate stage with the Republican and Democratic nominees during the general election.

Johnson, McAfee, and Petersen have all been on a media blitz to promote their campaigns, with Johnson having recently appeared on a NowThis video which has more than a million views on Facebook. Meanwhile, McAfee has been interviewed on CNN and Business Insider while Petersen has been on Fox Business, as well as being interviewed by Reason Magazine.

Johnson ended the interview with a final appeal to the public, saying,

I hope to be that nominee. Both of the major parties are succeeding in alienating more voters than ever before. The Democrat establishment is effectively shutting down its challengers, and Republicans are clearly rejecting their establishment. The net result may be that more Americans than ever before will be looking to a truly independent, experienced and proven candidate.