One aspect of Ron Paul’s policy that may have been libertarian circa 200 years ago is his promotion of the electoral college. While in theory this gives the states influence in determining the president, this is obviously not how it works in practice. In reality, it creates a privileged class of voters in certain states whose votes count for more. This is either because their neighbors are split politically which makes their state a swing state, or because their state is small. In the latter case, the voter has a higher impact in the college due to the college’s structure that guarantees a certain number of electoral votes.

Gov. Johnson on the other hand is well aware of the warping effects of the college. Because of this, he has consistently supported a national popular election for president. This would make all voters equal and end the practice of some voters being more important than others. It almost goes without saying that equality among citizens is a pretty basic libertarian idea.

The reason this is marked as “honorable mention” is because this issue is still hotly-debated in libertarian circles. There is not one “libertarian answer” to abortion. Ron Paul has always been very firm in his anti-abortion stance. He has supported legislation that would have defined life as beginning at conception at the federal level. Gov. Johnson in contrast has stated that he would almost always defer to the woman. His only stated limit has been that he opposes post-viability abortions.

The two do share one important belief in regards to abortion. Both have been clear that it is mostly a state issue and subject to federal dictate.

This all isn’t to say Ron Paul isn’t a great libertarian; he most certainly is. The point is that as long as we demand some inhumane purity from candidates, we won’t have any. Despite what many want to say, Gov. Johnson is a Libertarian (and a libertarian). Instead of humoring individuals such as Darryl Perry who are trying to undermine Gov. Johnson, libertarians should stand behind him. Like everyone else, he’s not perfect. What he is though, is a huge step in the right direction and a voice for liberty. 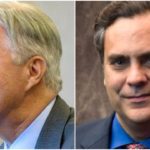