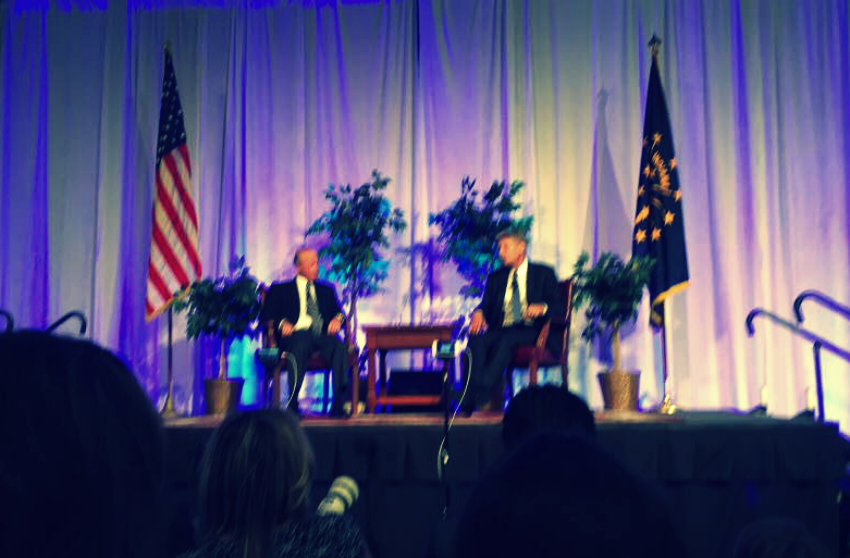 Gary Johnson had a Q&A session at Purdue University in Indiana Tuesday during a segment called “Conversations With Gary.” There were so many people demanding tickets to the event that they were forced to secure a larger location on the campus that held just over 1,800 people. Mitch Daniels, former Governor of Indiana, hosted the segment that was sponsored by Young Americans for Liberty.

There appeared to be plenty of video equipment at the event, but there are only very limited recordings available. Over 100,000 have viewed it from Johnson’s Facebook page.

A lot of the things that were said were repeated from other events, but somehow the delivery came across better at this event. The audio was not of the best quality from the source presented on Facebook, however, also presented were what appeared to be new things worth highlighting.

What should we do about Afghanistan? Johnson concludes that we should get out of Afghanistan tomorrow as the consequences will be the same if we were to leave twenty years from now.

Did you know that Johnson feels that Turkey, a member of NATO, is not a very good ally anymore? He obviously does not approve of their arbitrary invasions and meddling in other country’s civil wars. He feels it just makes a bigger and more confusing mess than the original condition of things.

Were there any remarks about Aleppo? Yes! Of course there were. Daniels brings up the topic of Syria and feels he has to mention that’s where Aleppo is. The crowd laughed at the statement with Johnson shaking his head smiling, but he didn’t get caught staring off like a deer in headlights this time. Surprisingly, he turned the situation around as he made fun of the horrible foreign policy and decisions that have led to this crisis with our enemies winding up with American weapons. I can best describe it as Johnson having the “last laugh,” if there ever was any real joke that can come out of the disastrous events in the region.

Have you ever wished you were sitting next to someone who was a member of the Commission on Presidential Debates and had his/her full attention? Well Johnson certainly did at Purdue, as Daniels is a sitting member of said commission. He was certainly not about to let go of this golden opportunity to say what was on his mind. In a bold statement, Johnson proclaimed, “The Presidential Debate Commission is made up of Republicans and Democrats. Mitch sits on the Presidential Debates Commission. Outside of Mitch, everybody else has no interest of seeing anyone else but a Democrat or Republican on that stage.” Interestingly, Daniels did not correct anything that Johnson said.

Johnson went another step forward and also claimed that over fifty percent of American voters are listed as Independent and wants to know where that representation is on the Commission on Presidential Debates Board of Directors.

Two quotes from Johnson of the night were: “This is a two-party system that needs crashing,” and “I was born with an overdose of common sense.”

I briefly spoke with Drew Thompson, Libertarian Congressional Candidate for Indianapolis District 7, and he had some wonderful things to say about being there. Thompson said, “It was the best performance I have ever heard from a candidate running for President. The entire night he handled the audience like he was talking to family and friends.” There was an after-dinner which Thompson adds, “Also, the guy sitting next to me at dinner…he’s a lifelong Republican – and texted his daughter, ‘I think I just met my political soulmate. I agreed with everything he said.'”

WTHR also reported below that traditional Republicans are turning to Johnson.

Even WLFI chose not discuss the great topics discussed in this article, but they did report good millennial points of view, although they did not mention the Young Americans for Liberty event sponsors.

Long line of people being let in for Libertarian Presidential candidate Gary Johnson. Speaks at #Purdue at 5:30. pic.twitter.com/UTadiVUE2y

.@GovGaryJohnson also says Daniels is only one on nat’l debate commission who believes anyone other than R or D belongs on debate stage.

Jeff Arnold of Indianapolis explains why he came to see @GovGaryJohnson. @USAToday2016 pic.twitter.com/opSS8Ek7r0

Part 1 of “Conversations With Gary” at Purdue

Part 2 of “Conversations With Gary” at Purdue 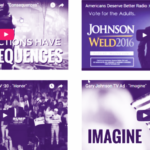