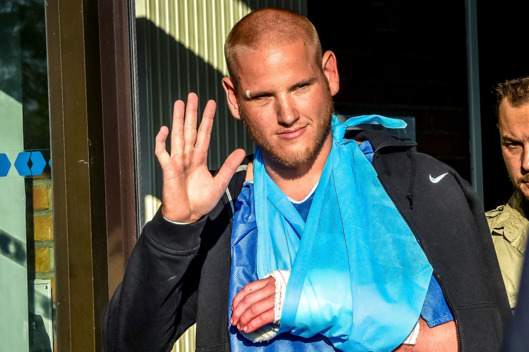 The American hero who helped diffuse a terrorist attack aboard a French train in August is in stable condition after suffering multiple wounds in Sacramento, California. Spencer Stone, 25, was “defending a friend” when he was stabbed four times in the chest, according to an Air Force official speaking to BBC News. Grainy CCTV footage depicts what appears to be Stone brawling with several men outside a liquor store before someone is knocked to the ground and the group scatters.

While some are speculating the act was in “retaliation” for his role in thwarting last month’s attack, Sacramento police have ruled out terrorism, attributing the stabbing to an altercation at a nightclub earlier in the evening.

Stone was one of three men who restrained a man carrying a Kalashnikov rifle and a box cutter aboard a French train earlier this summer. He required surgery to reattach part of his hand after it was slashed by the gunman.