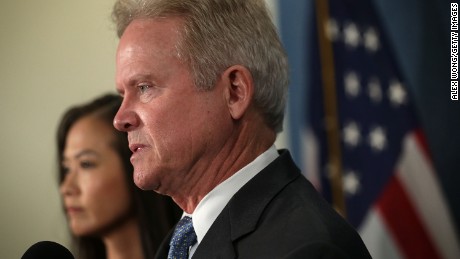 The Trump administration is reportedly considering former Democratic Senator Jim Webb as a replacement for General Mattis as the next Secretary of Defense. The idea to select Webb for the position has been mentioned by three officials, potentially bypassing more hawkish Republican options.

Mr. Webb has been an outspoken critic of military interventionism and the Iraq War which is very much in line with the president’s views of the issue. Moving forward, the Trump administration is looking for someone to help the president keep his campaign promise to bring American troops  home from Afghanistan and Syria – which he intends to keep, having tweeted on that very subject on December 22nd.

It seems that the former Virginia Senator would be someone likely to move foreign policy in a direction pleasing to both Trump and his base. “Is there an absolutely vital national interest that should lead us from containment to unilateral war and a long-term occupation of Iraq? And would such a war and its aftermath actually increase our ability to win the war against international terrorism?” Webb wrote in a 2002 article for The Washington Post. This and Webb’s skepticism of China make him a logical pick for the position.

In a 2016 Democratic Presidential Debate, Webb told the American people that we must stand up to China, saying, “To the unelected, authoritarian government of China: you do not own the South China Sea. You do not have the right to conduct cyber warfare against tens of millions of American citizens. And in a Webb administration, we will do something about that.”

It should also be noted that representatives from Vice President Mike Pence and acting White House Chief of Staff Mick Mulvaney have reached out to Webb about the Defense Secretary position, according to one of the three officials who said Webb was a likely choice. It has also been confirmed by a senior member of the Defense Department that Webb’s name has been circulating around the White House often.