Alexi Halket is a grade 12 student at the Etobicoke School of the Arts in Toronto Canada. Earlier this week she was sent to the Principal’s office for baring her midriff at school.  It was a violation of the school’s dress code and Halket was told by the Principal that it was “too inappropriate and looked too much like a bra.” After the meeting she stormed out of the office, livid that she was not entitled to do as she pleased.

She jumped on to her social media accounts with a plan to fight back against this indignation, and Crop Top Day was born. 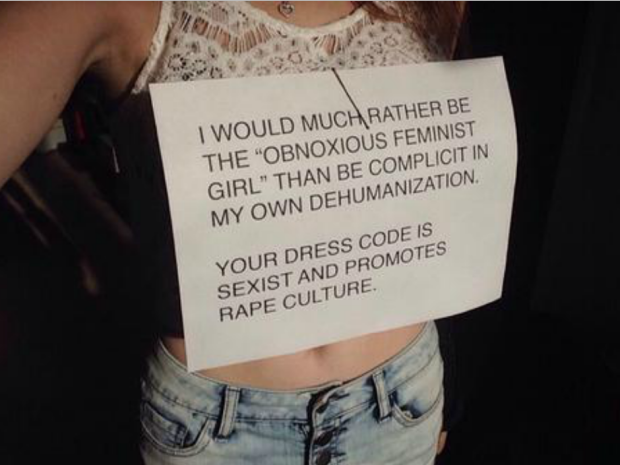 Their goal was simple, according to Halket “We wanted to stand in solidarity against people making women cover their bodies because it’s offensive and inappropriate.”

The spin was real.

Soon hundreds of other girls joined in on the protest and went to class in their own crop tops with messages written all over their skin like “Stand In Solidarity” and “Not Asking For It.”

The protest had gained momentum and they indeed all stood in solidarity fighting  to smash the Patriarchy and end sexism in the world. 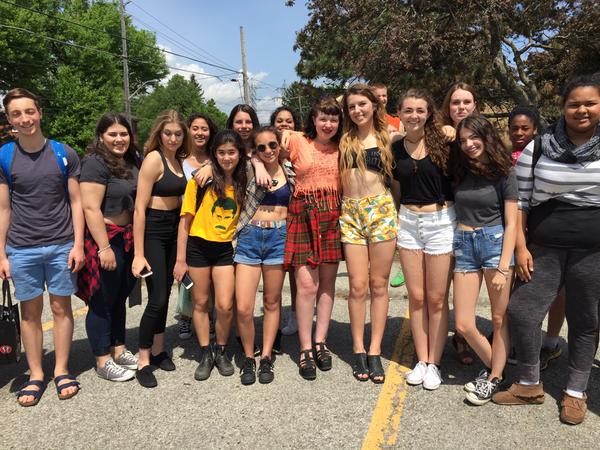 Only problem is that as hard as they might try to make this an issue about wider society, it’s really just about feeling entitled to wear whatever you want, whenever you want.

This is not new, every year across pretty much every school, students try to push the boundaries of school dress codes. My friends and I tried to, kids in other grades tried to, and kids in other schools across the city tried to. It may surprise Halket but as boys, we too had to follow a dress code and when we broke it, we got told to change.

It was about rebelling against the rules.

This has nothing to do with feminism, or body-shaming, or social justice. It’s not even just about the girls as I already explained that boys, then and now, are also subject to a dress code.

School is an environment for learning and like it or not, some clothing is inappropriate because it shows too much skin.

This is the part where the feminists begin screaming “Boys need to learn to control themselves” and “It’s not on girl’s to worry if they’re distracting boys in class.”  Would you make the same argument if you were sitting in class and the kid behind you is screaming at you the entire time while you’re trying to read? He’s not responsible for distracting you right? Because as a teenage boy, that’s exactly what it’s like when a cute girl is sitting near you, let alone sitting near you just wearing a bra. I’m no girl but I would imagine the opposite would be true as well if a shirtless boy she found cute was sitting next to her.

The only person that was sexualizing her outfit was Halket herself. It’s amazing that a student of an art school doesn’t understand the concept of ‘framing.’

In visual arts and particularly cinematography, framing is the presentation of visual elements in an image, especially the placement of the subject in relation to other objects. Framing can make an image more aesthetically pleasing and keep the viewer’s focus on the framed object(s).

Clothing as well uses framing and the strategic placement of color and patterns make your eyes look in the direction the designer wanted you to look.

In the case of Halket and all the other girls’ ‘crop tops’, it’s the skin of the belly and collar and arms that frames the chest and makes the eyes dart straight to it.

She made herself into a sexual object and that’s one reason why there are rules to prevent that sort of thing. Wishing that people were not sexually attracted to body parts so that you could wear, or not wear, anything you wanted, isn’t going to change hundreds of millions of years of evolution.

Or maybe I’m wrong about her not understanding framing, she was able to cleverly frame this tantrum at not getting her way into a discussion about feminism, body shaming, and rape culture. Halket was able to trick students across the city into supporting her and get mass media coverage. Hell, she even got me to write about it.

It’ll be interesting to see how the school responds and how this ends, but one thing’s for sure, the boys at her school got a heck of a free show.

What About Chase? Circumcision & The Right To Bodily Integrity