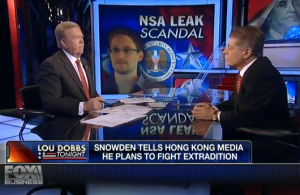 Fox News Sr. Judicial Analyst Judge Andrew Napolitano joined Lou Dobbs to discuss the Edward Snowden NSA whistleblower case. Judge Andrew Napolitano asks the question of whether Snowden is bound by an obligation to keep secrets, or the duty to uphold the constitution. Dobbs asked whether the Judge believes there should be some trepidation about calling Snowden a hero before we have all of the facts regarding the case. Judge Napolitano was not troubled by any of the issues involved because he rejects the idea that we should be dwelling on what Snowden’s motivations were. He believes we should be focusing on the illegal acts the government is doing now in our name. Judge Napolitano made a distinction between legal and constitutional when he said,

“In Congress’s mind, whatever they say is legal is legal… What the government has done is legal because the PATRIOT authorizes it, but profoundly unconstitutional because the congress has attempted to disregard the constitution.”